Trenches: Generals is an iPad app from Thunder Game Works that takes the player to the front lines of The Great War where the British take on the Germans in a face to face battle for domination. Despite the carnage that ensues, it is actually quite amusing. The graphic details of the killing fields should not be worrying for concerned parents, but be aware that they are there.

Trenches: Generals is a game that is easy to get into and the controls are simple and straight forward, just tap on the units you want to deploy, and swipe to advance or retreat.
The game also offers a tutorial when you start off your campaign. 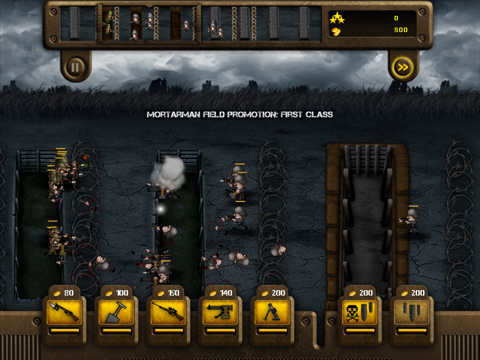 Single or Multiplayer modes are available, but Multiplayer is only in portrait mode. It does support GameCenter, but I don’t see that adding any value to this particular game. Along with the easy to use controls, comes some great sounds. Personally I can do without the music, but I love the sounds of the battle, after all what is a battle without lots of explosive noise?

My absolute favorite feature of the game though is the graphics. From the icon and the very first screen, through the menu screens and into the game play the graphics are exactly what you would hope for in a game like this. The high quality of graphics is complimented by the design of the troops with their comical cartoon look, and the design of the buttons. I guess in terms of graphics in this game there is nothing that I would think could be improved and that is what caught my attention and held it for quite a while. Another game play plus is the ability to upgrade your attacking options as you earn perks. There are 3 difficulty levels, and the different campaign stages limit you to certain units just to keep it interesting. 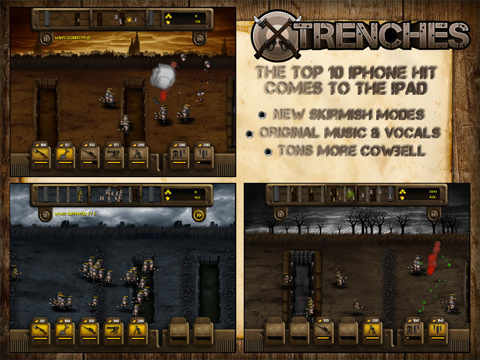 I was convinced that this would be a 4.5 rated game, but after a while the problems became clear and irritating. Whilst they seem to have gotten all the sounds and graphics right, playing against the AI really hurts this game a lot. The standout problem is that while the player has to wait to recharge units and artillery the AI seems to push them out at will, and when you get to that point all the fun is gone.

To add to your woes, the commands take a while to be actioned by the units, and the retreat is especially slow, so the chances of escaping a bombardment with most of your units is slim to none. Several people I have spoken to have also complained about the game crashing, although I personally have not experienced this – credit must go to Thunder Game Works for releasing an update to address the crashing so soon. Another update is also currently being worked on, hopefully it will correct the problems with the AI.

If I were asked to endorse this game, I would not in good conscience be able to do so as a fun game to play because of its problems. That being said, I do give this game a decent rating for the exceptional work on the graphics and the potential that this game has. I am hoping that the next update does address the AI problems and opens the door for good old fashion fun, if they do so then this will be a great game and definitely one to get. Sadly however, in its current version it only gets a 3 from me.

Here is a video demo of the Trenches: Generals app on the iPhone