Pixel Ranger is an iPhone app developed by MetroGames in 2011 which claims to be a modern game with a retro feel. At $0.99, Pixel Ranger is a decent price for anybody to check out this app on their iPod Touch and iPhone, but does it deliver?

Right away, “retro” does not describe the menu and loading screen graphics. In fact, the characters more so resemble the characters in the music video “Money for Nothing” by Dire Straits — thin and blocky like flattened Legos. Once you actually start playing, though, the in-game graphics do present a nice retro feel similar to the Atari. 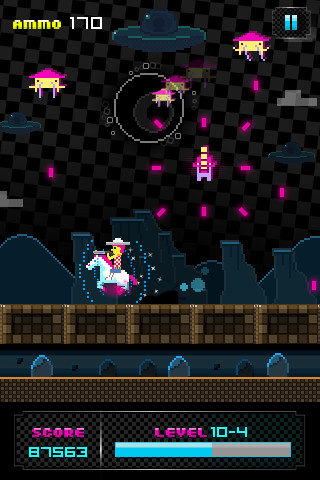 Pixel Ranger offers 12 episodes in all, with each episode containing 4 levels, in “Classic” mode. Once you complete a level, which requires you to kill a certain number of enemies, you move onto the next level. At the end of each level you are awarded a medal grade, offering replayability, Additionally, every fourth level has an extra challenge, such as standing on a moving conveyor belt. You can also unlock three “Endless” levels, where you must fight against enemies infinitely, trying to get the highest score, adding additional replayability.

Pixel Ranger also features a very innovative concept in its gameplay; every shot you take subtracts from your total number of pixels, and the pixels represent both your ammunition and your health. This adds nice strategy, requiring you to carefully aim each shot, because each shot takes away 10 pixels of health. There are also numerous power-ups you can find ranging from good, such as speediness, to bad, such as reversed controls. 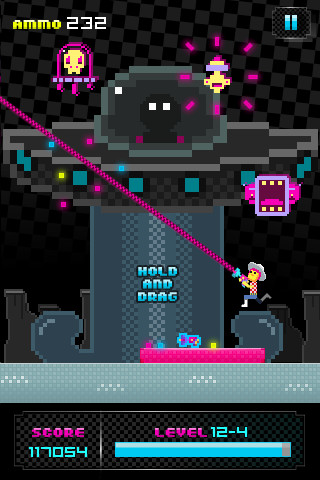 Shooting requires tapping on the screen in the direction you want to fire, which is perfectly fine, but the only way to walk back and forth is to tilt your device. Though many games make decent use of the device’s accelerometer, it does not really work in this case. Tilting is often met with delays in response, preventing your cowboy from avoiding enemies. Jumping also requires a simple tap, but on a completely different part of the screen. The app asks for too much input, causing too many moving parts and your hand can quickly get in the way of the screen.

Two other things also keep Pixel Ranger from being at the top of its league: the music and the constant loading. At first, the music is enjoyable, but it gets old very quickly because it’s a single loop. The loading is also an issue as it even occurs within the game , averaging about five seconds each and sometimes reaching 10 seconds.

For $0.99, there is plenty of value with 48 levels and Endless Mode. Pixel Ranger tries to offer a twist on a standard shooter, but while it does work, the chaotic controls greatly hinder it. Though it only has a few problems, these problems prevent it from being a classic.