Since the inception of video games, one of the most popular styles of gameplay has been the classic first person or third person shooter. Unfortunately, this is a genre that is difficult to play on iOS devices such as the iPad or iPod touch , and many shooters have failed to live up to expectations. One third person shooter on the iPhone that has risen to the challenge, however, is 9mm from Gameloft. It is important to note this game (9mm) contains a ton of profanity, sexual content, drug and alcohol references and intense violence, which means you need to be at least 17 to download this app.

The plot behind 9mm revolves around the character John “Loose” Kannon, the leader of a special unit of cops whose purpose is to eliminate the most wanted criminals through any means necessary. The story begins when John’s team kills the brother of a drug lord and confiscates millions of dollars in illegal drug money. Infuriated by the death of his brother and the loss of millions, the drug lord arranges to have every member of John’s team murdered, and only John can save his team by killing the drug lord first. The plot is extremely captivating and acts as an incredibly favorable aspect of the application. 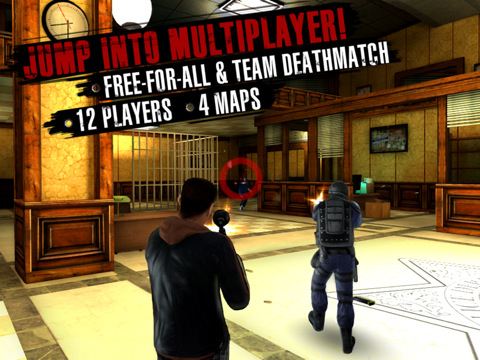 One major drawback that may make 9mm unappealing to some people is the violence and profanity. Like the Grand Theft Auto games, 9mm involves brutally murdering numerous people, an excessive use of vulgar language, drug references, and many adult scenes such as a level that takes place in a strip club. In general, most players are mature and have grown acclimated to the presence of violence and profanity in video games, and thus will not be bothered by this aspect of the app. For those gamers who are very sensitive and become offended easily, however, the content of this app could potentially be perceived as repulsive and should be avoided.

Despite the mature content, 9mm is a phenomenal app that surpasses nearly all other games in the genre. For those who are seeking a high-quality third person shooter, look no further than 9mm.