When you think about landmark video games in the history of the industry, a few names come to mind immediately. Pong, Pac Man, Tetris, Super Mario Bros., and Halo all changed the video game industry with groundbreaking gameplay and graphics superior to most games before them. But one of the biggest, and most controversial industry game changers is celebrating it’s tenth anniversary — Grand Theft Auto III. Now the game that helped to pioneer the “open-world” genre of gaming has come to iOS in a universal app that is incredibly faithful to the original PlayStation 2 version of GTA III. 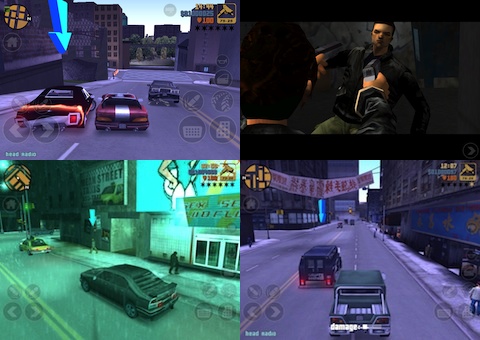 For those unfamiliar with Grand Theft Auto III’s storyline and premise, you control an unnamed bank robber (Claude, for those who are familiar with storylines from sequels) after he escapes a prison transport vehicle in a gritty area known as Liberty City. As you move up the ranks of the gang circuit in Liberty City, you’ll work for various crime bosses, corrupt cops, and others — all in an effort to rise up to be one of the most notorious gangsters. Of course, along the way you’ll have the option to perform various tasks and missions, or you can choose to ignore the storyline completely and explore the enormous landscape that is Liberty City — driving taxis, ambulances, fire trucks, and robbing and killing the citizens, all while escaping the police who will be out to stop your crime sprees. 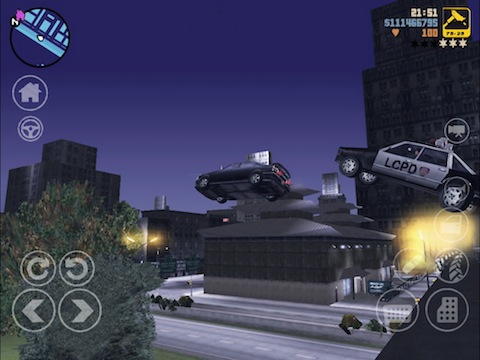 The world of Liberty City was massive on the original PS2 version of GTA III ten years ago, and it feels just as large on iOS. The first time I carjacked someone and began driving around, I felt right at home as I explored the seemingly never ending streets, while simultaneously trying to maintain control of my (still, after 10 years) touchy automobile. Speaking of controls, Rockstar has done an admirable of porting GTA’s controls to the touchscreen. 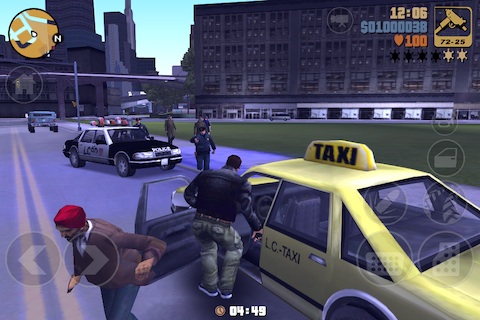 Actions have their own dedicated buttons which are clearly labeled by icons on the button (a bullet to shoot, for instance). For the most part, these buttons worked just fine, though I did enjoy the considerable increase in the size of the buttons on the iPad’s larger screen, but I rarely encountered difficulties with the smaller size of the iPhone display. 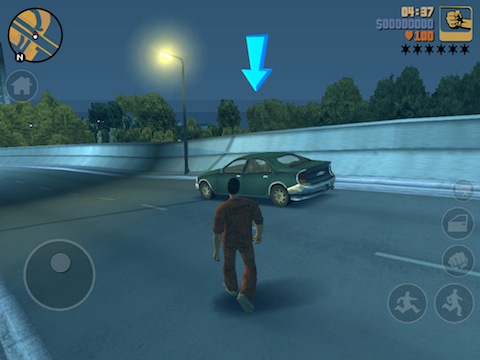 Another landmark of GTA III was the presence of multiple radio stations in any car you hop into. These radio stations return in GTA III for iOS, and are present at the bottom left of the screen as you drive. Simply swiping left to right will change the station, and each of them is a joy to listen to, even during the commercials. The voice acting is also well done, lending an added dimension to the already colorful residents of Liberty City.

Grand Theft Auto III was a masterpiece ten years ago, and it’s really great to see that the game has stood the test of time while finding an entirely new audience on iOS. While there are a handful of “GTA Clones” available on the App Store, GTA III is the one that will have me coming back for more for a long time. At just $4.99 for a universal app, GTA III is well priced for a great trip down memory lane.