Bring Me Sandwiches is the newest iPhone app from Adult Swim games. The concept is cute – the player plays a sandwich maker who has to make bizarre sandwiches for an alien who has descended upon his shop. Bring Me Sandwiches! is available for iPad , iPhone, and iPod Touch and is an inexpensive little application that will keep either a player entertained for days. 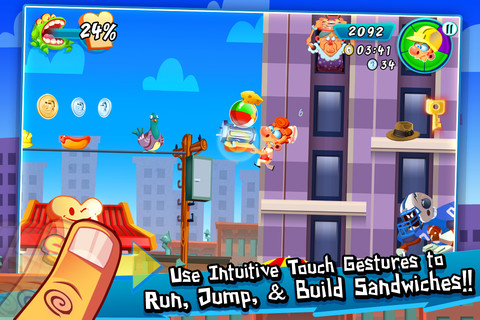 Bring Me Sandwiches! is a 2D side-scroller with colorful graphics and upbeat music. The player can decide whether they want to control the game with tilt (by tilting their iPhone or iPad ), touch (by resting their thumbs on either side of the screen as they hold it), or by touching buttons. The controls can be touchy for people not used to playing sidescrollers, but the only real penalty is missing time or a spilled sandwich. There aren’t enough dangerous obstacles to make this application as frustrating as other side-scrollers can be.

The levels feature secret agent men who give the player tips as well as act as springy bouncing boards for their sandwich-making endeavors. Always be on the lookout for them, as they often have some sort of new feature nearby that they teach the player about. Players also have to be on the lookout for birds and humans, including a baseball player and a hippie (who can be added to sandwiches later – adding the hippie gave me the “Presidential Seal of Approval”.) 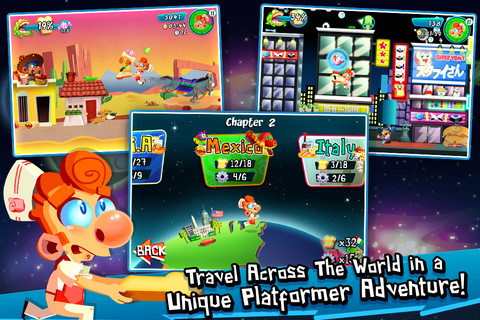 As levels progress, there are bigger challenges. Adding specific ingredients to a sandwich (cat, hard hat, etc.) or making more than one sandwich. One can add anything including to their sandwich (small items for small pieces of bread, big items for big), which fills up their Food Journal (a fun room on the opening screen that shows each ingredient they’ve ever used.)

My only real complaint is that there are goals to be met (such as a time, a specific score, and a number of spills you’re not to exceed) and the player doesn’t find out about these until after the level is done. It is necessary to get so many of these goals filled to add to your Spaceship graphic on the Food Journal. If these were shown before the level, it would be easier. Also, at times I would collect something that made my heart meter increase, but I could never find out what it was that I’d collected. The game is sometimes too chaotic to truly see what you’re doing.

Overall, Bring Me Sandwiches! is a fun purchase and one I would recommend to anyone who likes side-scrollers. The levels are fast, at about two to three minutes a piece, and can be played over and over again.

Here is a video demo of the Bring Me Sandwiches!! app on the iPhone