Every Halfbrick app I’ve used on my iPhone has impressed me, and Age of Zombies Anniversary is no different. Age of Zombies Anniversary is a shoot ’em up game in a zombie apocalypse, featuring both Story and Survival mode. Within seconds of playing Story mode, I was already impressed with the humorous dialogue. You play as Barry, just your average guy trying to stop an evil professor from creating zombies. The goal is simple: use guns, grenades, and power ups to kill a certain number of zombies in an arena-type map. Like other shoot ’em ups, there isn’t much exploration involved, but the fast paced action and achievements both give you motivation to play. 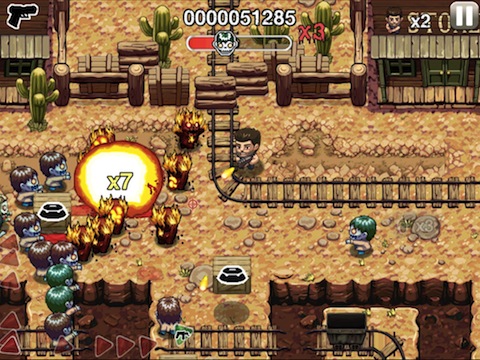 The story brings you back to what seems like prehistoric times. After the professor created zombies, he sent them in a portal, with Barry following. There really isn’t much of a story involved, but that’s to be expected from the shoot ’em up genre. After finishing a few missions, I was encountered by a zombie T-Rex who wasn’t too happy with me. Using a sentry and a few other guns I picked up from the ground, I was able to defeat the goo spitting T-Rex and his zombie followers. My work in prehistoric times was completed, but now it was time to move up in history – specifically the 1930s. Before I could enjoy the fresh air, I was encountered by another horde of zombies. Time to kick some ass. Age of Zombies Anniversary is filled with humorous snippets, including the voice changing Barry, the dialgue, and some questionable hopscotch courses laid on the ground. With that and action combined, it’s hard to not love Age of Zombies. 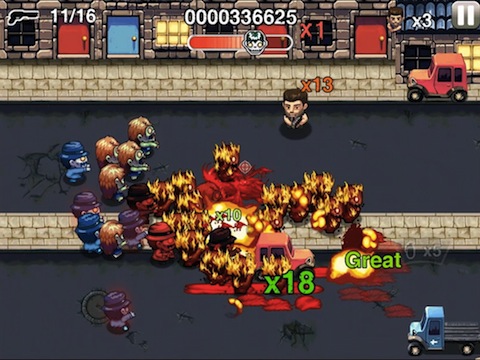 Halfbrick really raised the bar for the zombie shoot ’em up genre. The Story mode brings you back in time and in different countries, deciding to stay away from the cliche modern day zombie apocalypse. You can revisit the old maps in Survival mode. Survival mode is exactly what you would expect: stay alive for as long as you can with a large variation of weapons and power ups. As the waves increase, they get more intense, but the constant power up drops should definitely help you.

The audio and graphics are superb. The unique art style used to detail the maps, zombies, and characters combine with the high quality audio to create an excellent iPhone app. I didn’t have the chance to review the iPod Touch or iPad versions since this app is shipped as a universal binary, but I’m sure you’ll see the same type of quality.

Gamers who are looking for a new zombie or shoot ’em up game should definitely check out Age of Zombies. My new favorite app.

2 Comments to “Age of Zombies Anniversary”