If you enjoyed PVZ and are yearning for more, you’re in luck. Something new for your zombie killing pleasure, a soccer ball instead of snow peas. Pro Zombie Soccer from Chillingo stars this kid named Jax who gets bitten by a soccer zombie Julinho humorously named to sound like a Brazillian soccer star from SC Marcelona. So of courese, in the process Jax gets Julinho’s powers and can now kick the hell out of zombie head’s with his powerful strike. 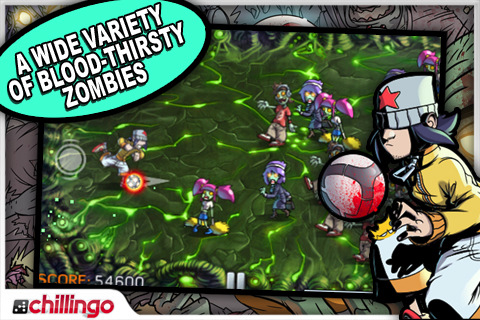 You play using one finger which you use to hold down and release to shoot the soccer ball. Aim by dragging up or down and bounce the ball off walls and or shoot straight to the zombies’ heads. A series of unlockable zombie powers will help Jax go on a killing spree with higher powered soccer balls and lasers. Controls are smooth and aiming for the head of zombie’s gives you more points, heck you can even score a hat trick.

The gameplay gets repetitive quick. There really isn’t much as far as strategizing going on in Pro Zombie Soccer. You just have to kick the ball over and over. The ball in the game magically gets sucked back to your foot after you kick it, saving you the need for a ball boy. Unlike PVZ, PZS lacks the sense of accomplishment you get after finishing a level. You’re basically standing still at the exact same spot the entire time on the left of the screen and shooting the ball with the same foot over and over. You do need to time your shots and aim correctly, but that’s about it. 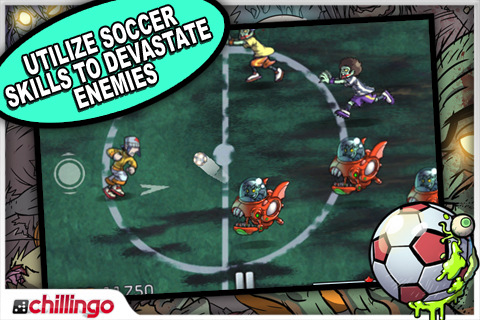 The game has an awesome soundtrack, funny commentary and sound effects, and again the controls are super smooth and the graphics are as sleek as the come. The zombies come in all shapes, sizes and sexes. The rewards and combos are excellent, and the backstory makes for humorous watching.

If you enjoyed Plants vs. Zombies, then Pro Zombie Soccer is a close second. It just needs a dash of movable play to give it what it lacks in terms of gameplay. After all it is a soccer game. Why isn’t there any running going on?