Angry Zombies 2 HD for iPhone and iPod touch is the latest app from HighMind. One of the early apps I reviewed was Angry Zombies. I also gave it a pretty good rating and it still stands as one of my more favorite apps. Now I present to you Angry Zombies 2 HD. I literally had a nerdgasm. It was one of those moments where you buy something subconsciously. It was like buying a hooker knowing you would go to hell but a little less extreme, just a little.

My first impressions of the app were quite good. It was what I enjoyed about the first game and more. With more zombies, mini games, boss fights, and 50 levels, it felt more like a sequel than an expansion. When I say expansion I mean those other apps with a part 2 that only has one or two things. Unlike those, Angry Zombies feels extremely revamped for the good. 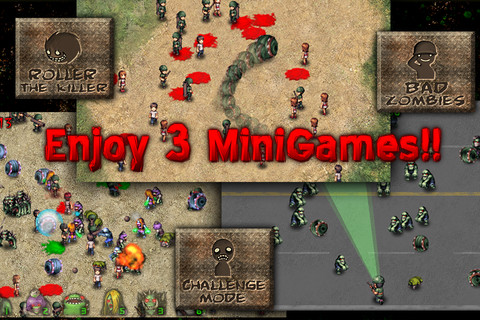 Let’s start by going over the major changes. Instead of only Five zombie to unlock and upgrade, there are an additional five alongside the older ones. There is still the same upgrade system along with real money for in game currency. I definitely felt some nerfs and changes to some zombies compared to the first game.

The game ui definitely looks better. This time, Angry Zombies 2 is in HD. That’s right, hd. Now your iPod touch will die faster and will heat up quicker for the sake of a cleaner and crisp looking game play. Everything definitely looks better, not that I had a problem with the old games graphics. This app is definitely something you can pick up and play without any experience with the first one. 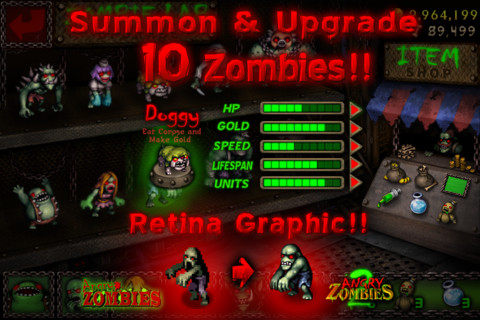 Some minor flaws that can easily be fixed are the random freezes and crashes. None of these issues occurred to me when I played it in hard mode. I probably shouldn’t have though because some of the levels felt almost impossible. They literally took me hours to figure out how to beat. It’s not as easy as just spamming your zombies everywhere, but to just to know which to call out first. Another flaw was the game slows down a little when you call out too many units. But it won’t affect the game play much, it’s more of a slowdown than a lag spike.

Besides those the game was very enjoyable and I’m still playing it while writing this review. There is a non hd version and hd version found in the app store. Both require an upgrade to the full game which can be selected I. Game for a small fee of $1.99.