Ice Rage is a fun new hockey game for the iPad, iPod Touch or iPhone from Mountain Sheep, the same developers who created Minigore and Bike Baron. There is no advanced story to delve through here. You are just playing hockey. However, this app is certainly worth the money, and there is a fun little upgrade as well that is inexpensive.

First of all, not just the name of this game, but also some of the artwork in the App Store for Ice Rage might lead you to believe there is head to head hockey fighting with the gloves off in this game. There is not. There is however hitting during gameplay.

Controls
The controls for Ice Rage are very simple, and that’s the way it should be. There is a joystick to the left and the “A” button to the right. The joystick lets you move around, while the “A” button is used exclusively for shooting. It’s very simple and intuitive, so you won’t waste time in the app trying to figure out how to play this game.

Single and Multiplayer
The primary play mode is single player, where you go against computer-controlled players as they try to score more points. There is are three different difficulties you can choose from. 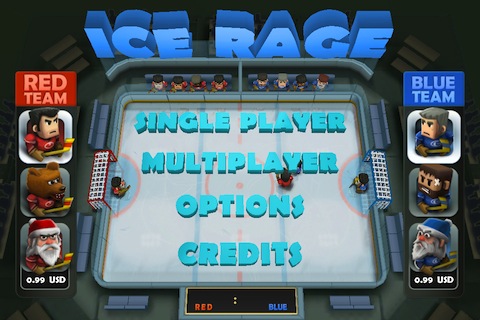 Ice Rage also comes with a local multiplayer mode, regardless of whether it is an iPad, iPod Touch or iPhone. However, the multiplayer is not online, it can only be done with the one device. Multiplayer is still fun if your friend is right next to you.

Audio
When you are skating the ice and scoring goals, you don’t hear the subtle music in the background, but you will hear the sound of characters skating and hitting each other. If you actually sit back and listen to the music though, it’s actually pretty good and it just makes this app even more fun.

Graphics
Ice Rage is meant to merge 3D graphics with 8-bit aesthetics, and it does a great job of that. The models themselves are obviously based on pixels, but as 3D models. They look great and are sure to make you laugh at least a little. 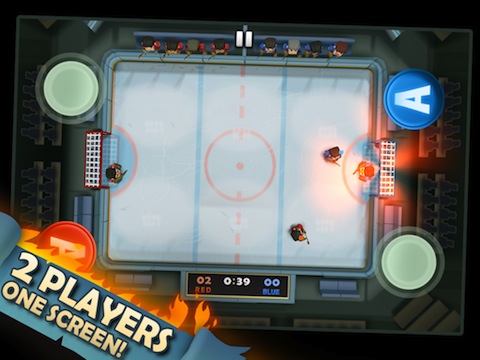 Value
Ice Rage costs only $0.99 and, it is totally worth that and more. You can also buy an upgrade for another $0.99 via in-app purchase. You may not feel so bad about having to spend more money once you know what you’re getting: Santa Claus. He becomes your newest teammate and best friend after buying the character.

Overall, Ice Rage is a fun new school hockey game for iOS devices. It would be really cool if the developers added an actual one on one fight mode to Ice Rage. The game also lacks online multiplayer capabilities as of right now. If the developers add these 2 features, this game would be perfect. However, these are not hard to overlook once you get into the game. Ice Rage is a fun, fast paced hockey game and works on most newer iOS devices. You get inexpensive hockey gaming action. The controls are easy to pick up, graphics are funny, the audio fits, and you get a two-player mode.