Save the Furries! review

Save the Furries is an iPod Touch and iPhone app made by Bulkypix where you have to save a bunch of small green aliens from a very hostile world with blue aliens trying to capture them. Save the Furries! is oddly named because, despite being called Furries, the aliens are not furry at all. In many ways this application harkens back to the old Lemmings app, but upgraded and with many more puzzles. Is it worth getting this long 60-stage game? Or should you save yourself the frustration?

Concept
The Furries love visiting other planets, but apparently every planet in the galaxy is filled with spiked pits, hostile aliens and so many other traps that you have to wonder how sane these little guys are.

You have to get the aliens to a safe zone at the end of the stage by moving and manipulating the game world. In some stages you can sacrifice a few of the Furries, but not many of them. 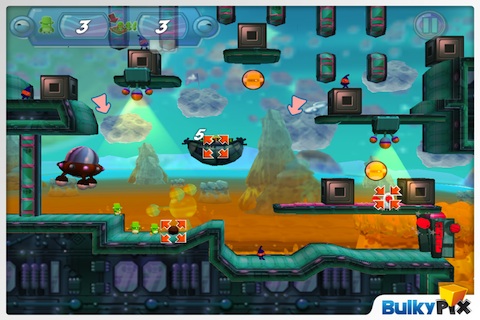 Controls
The controls themselves are simple, but the mechanics keep changing. You have to tap and move boxes, traps, boulders and other things to keep the Furries safe. In the later stages, you rarely have room for any mistakes and you have to move very quickly to beat the stage, which can get a little annoying.

Audio
The music is a little strange and upbeat, which fits the world and the Furries. You will definitely like the music, but it can get a little monotonous if you play for too long. 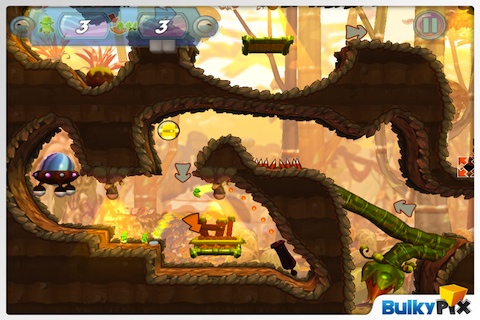 Graphics
The graphics are rather crisp and it is easy to tell the world and its traps apart from the Furries. You are going to love this, because keeping track of those little guys is hard enough, and you don’t want anything to distract you. The world also looks very fun, with graphics resembling PS1-PS2 graphics.

Stages
There are 60 stages in the Save the Furries! app, and they just keep getting harder and harder. The first ones are pretty easy as you are learning the controls, but after about stage 10-15 they get really hard. Unfortunately, it’s a little difficult to play beyond this point, because you will want to yell at the Furries for being stupid enough to walk into spike pits over and over again.

If you are into challenging apps, this one will challenge you. You have to think of physics and you have to move quickly to make sure you safely rescue the Furries.

Overall
At first Save the Furries! is very fun, but it can get very difficult later on, a little too difficult to really be justified. However, if you like challenges you will like this. The graphics, controls and audio are all very good and fit the world perfectly, so at least you won’t have to worry about faulty controls messing you up. The 4 dollar price tag could turn a lot of potential casual iOS gamers away as well.

Here is a video demo of the Save the Furries! app on the iPhone

This 3rd Party App is available at the Apple iTunes AppStore. Browse the full list of all AppStore apps filed under the AppStore category.
Download Save the Furries! at iTunes App Store
Price: $3.99
Developer: Bulkypix
Version: 1.0
Size: 92.36 MB
AppSafari review of Save the Furries! was written by Darius Reimm on December 23rd, 2011 and categorized under App Store, Games, Physics Based, Puzzler. Page viewed 5310 times, 3 so far today. Need help on using these apps? Please read the Help Page.