Mega Man X by Capcom is a new iPod Touch and iPhone app that is a revamp of the original SNES version. This iOS version of Mega Man X which the I’ve reviewed on an iPhone 4, has made some improvements to the original which was published in 1993.

Graphics
The graphics are smoother than the SNES version, and the screen feels closer as well. Many people new to Mega Man X may appreciate this upgrade, but I personally feel that the graphics go against the original 16-bit charm that X had. 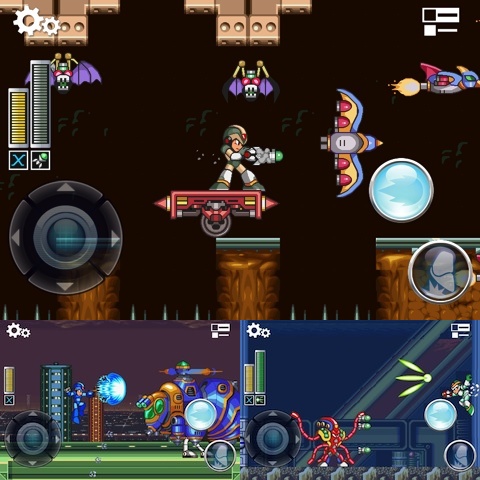 Audio
The audio in this app is much like the graphics: similar but upgraded. The sounds and background sounds are very similar to the original, but they don’t have that 16-bit charm anymore. They are made with new technology, and those with sensitive ears will hear the difference. Believe me, if you are a big retro gamer, then this isn’t going to be your liking. Those new to this series will like the upbeat sound track.

Controls
Controls in Mega Man X will take some getting used to. On the device’s screen you will see controls to the left for moving, and controls to the right for shooting, dashing and changing weapons. The controls are simple and basically emulate the original’s. However, one thing Mega Man X purists won’t like is that X has the dash at the beginning, while the original barred him from using it until he got the leg upgrades. 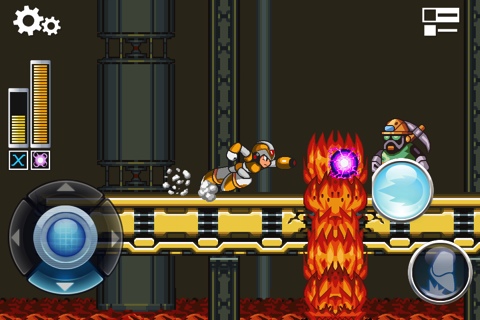 New Things
While there are a lot of things similar about this app when compared to the original, there are also a lot of new things. For one, there are difficulty settings to choose with “Story Mode.” Many proud gamers will scoff at the inclusion of an easy difficulty, but there is also a hard difficulty as well that makes things a little more challenging.

Speaking of challenge, there are challenges you can achieve, much like awards on other systems. These involve simple to complex tasks, and they can be a little fun to get. Not only that, but there is a ranking mode where your score goes head-to-head with other players’ scores to see who is the best. However, I am sure purists will also scoff at the inclusion of scores, but new players seem to like it.

Load Screens
This is going to make you think. The iPhone 4, and all the other Apple devices, are super powerful devices that should be able to beat out the SNES any day of the week (hardware wise, I’m only talking about hardware).

Why is it then that MEGA MAN X has load screens? Anyone who played the original Mega Man X is going to hate this. With the original, you could coast through an entire level with no loading. With this iOS version, the stage is setup like a bunch of little rooms, and once you enter the next “room” you have to wait for it to load. The load isn’t long, but it definitely is annoying.

Overall
First of all, if you want a real taste of what Mega Man X is, pick up a console or top loader and play the original. Having said that, MEGA MAN X is a fun game, especially for those who don’t have a SNES emulator or just want a mobile alternative. There are 12 stages plus secret areas like sub tanks for added value. The price is a bit high and in app purchases can add another four dollars to the total.