The multiplayer aspect of the Battle Bears Royale app is actually really awesome. I can honestly say that I was very pleasantly surprised with how smooth the entire thing ran, and how fun it actually was. There’s tons of power ups for you to pick up in the field and plenty of places for you to run around and hide. On top of that, there’s a great group dynamic that comes along with fighting off a team of enemies back to back with some close allies. 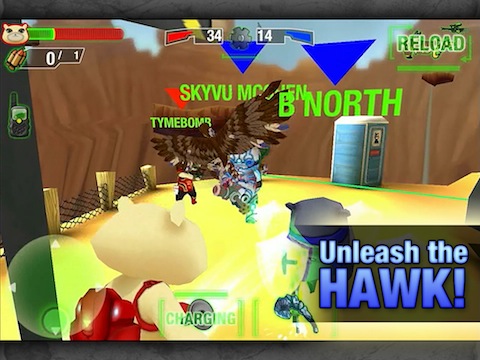 On top of the normal multiplayer battle mode you can also play a game of capture the flag, which is a great source of fun, especially if you’re looking for something a bit more challenging. Each game, however, will cost you a bit of fuel, which refills every two hours or so.

As you play more and more you begin to gain levels and earn points which ultimately allow you to buy different kinds of weapons to use in battle. This is definitely one of my favorite parts, as you can really get creative while deciding exactly how you want to approach these war-like situations.

I did find the controls to be a bit difficult, especially when it came to aiming. The camera just moves a bit too fast which makes it very hard to actually zero in on a target and gun it down. And with first person shooters, that tends to be a very important part of the process. I wish that the combat system, along with the general placement of the buttons, had been worked on a bit more before it was put up but it’s not horrible.

The graphics are pretty cute, albeit a bit on the low quality side. They weren’t distractingly bad but they weren’t really anything to marvel at either. They were just alright. 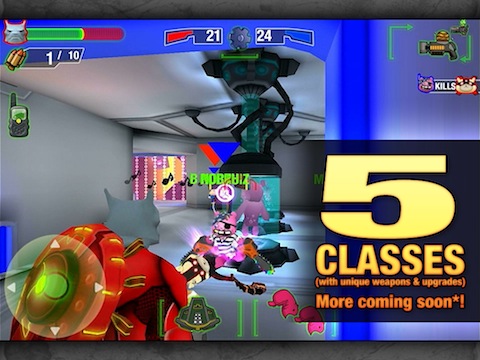 The gameplay audio is pretty interesting for me, as I usually hate playing games with the sound on. However, I actually enjoyed the entire experience more with the sound on while playing Battle Bears Royale. There’s something about the sound effects which just serves to make the entire thing much more unique.

Overall, I’d say that this application is pretty top notch. My only real problem, which I stated earlier in the review, is the control system. If they release an update that fixes that minor problem, it will be absolutely perfect.