Hero of Sparta II is the latest app from Gameloft released for the iPhone. If you look back at the history of mobile iOS gaming, you will find a rich catalog of critics and skeptics who all said that a good action game, especially a 3D one, can’t be effectively done on the system. Thankfully, the original Hero of Sparta was one of the first titles to prove those skeptics wrong. With a tight control scheme, excellent graphics and fluid gameplay, the God of War clone was a smash hit.

Of course, developer Gameloft is always eager to continue their past successes and looked to do so again with the release of the sequel, Hero of Sparta 2, in 2010. The plot is essentially the same as the original title, with similar arena-style fighting mechanics to boot. However, the graphics and content have been improved, but is this enough to make Hero of Sparta 2 worth a purchase? Let’s take a closer look. 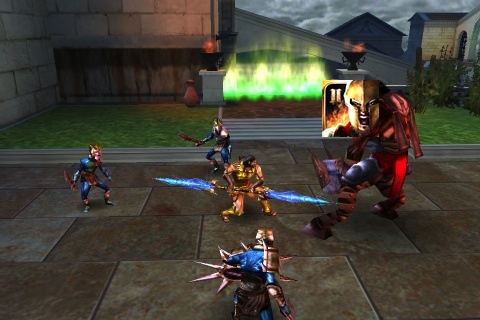 Graphics
The standout element from the first Hero of Sparta app was its fully rendered and detailed 3D graphics. Hero of Sparta 2 impressively outdoes its prequel, adding bright flames and finishing flourishes that result in varied sprays of bodily fluids from your enemies. The armor and weapons, especially the new unique power-ups, all have interesting details, like Celtic runes on the swords or nice bulky chest pieces for armor.

Unfortunately, Hero of Sparta 2 does run into a few graphical glitches, specifically when there is a lot going on in battles. Boss battles typically feature hulking brutes that, while nice to look at, can sometimes cause screen stutter and graphical glitching. Still, these graphical issues only really pop up every once in a great while, and only last a few seconds. However, I have heard that iPhone 4S users have more serious graphical issues with the game. I use an iPhone 3, so I cannot comment on that. iPad users have not had the same complaints, probably due to more processing power and a better screen resolution. 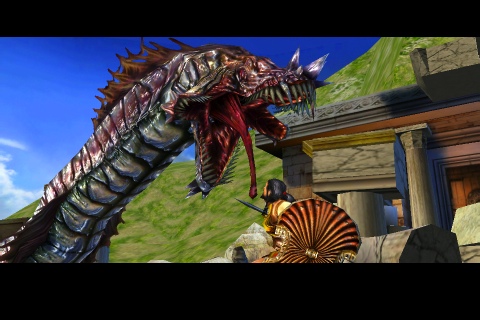 Controls
The controls for the application are surprisingly good for an iOS title. A quick flick of your finger on the on-screen pad both moves your character and also initiates an action against a nearby enemy. The controls for the iPod touch are similar to the iPhone as well. Starting awesomely brutal combos is as simple as a quick side jump to start an opening and then flicking up on the screen to toss your baddies in the air. The controls feel good, react quickly and really give your character a sense of space and gravitas in the world.

Content
Hero of Sparta 2 does make some improvements in its content over Hero of Sparta 1, more noticeably in its combat upgrades and enemy details. New enemies can be encountered at almost every new arena battle, including hulking blue armored knights and even some fire-breathing giant man-lizards. Aside from interesting enemies, new weapons and power-ups are unlock able early on, giving Hero of Sparta 2 some badly needed depth.

Unfortunately, we have also seen most of Hero of Sparta 2 in both the original and other knock of God of War clones before. The control system has been copied over too many times to count, and even the stellar graphics can’t save the iPhone app from feeling a little tired by the end of an hour or so of playtime.