Wanna watch free movies and TV shows on your iPad, iPhone or iPod touch? Crackle from Sony Pictures Entertainment has released their application which you can grab for free and start enjoying free content right away. The app has a nice interface and is supported with intermittent advertisements. The video quality is very good and the selection is actually quite large, enough that you can add this to your list of other content apps alongside Hulu Plus, Netflix and the ABC app. The content is different based on your region, and is currently available for users in US, Canada, UK and Australia.

There is a featured tab where the best new content flips in a slideshow. Filter movies, or TV shows in their own respective tabs. If you like movies, Crackle has over 250 titles in the app as of right now. You can see them alphabetically, or sort by most popular, or recently added. In the collection section of Crackle they have series of content with related topics packaged together, such as Battle Ready, Blockbusters, Awesome 80’s and Slapsticks. TV shows also have the same type of presentation. Some of the popular TV shows I see here include Seinfeld, and Married with Children. There are also a bunch of short TV show clips that Crackle calls “Minisodes”. 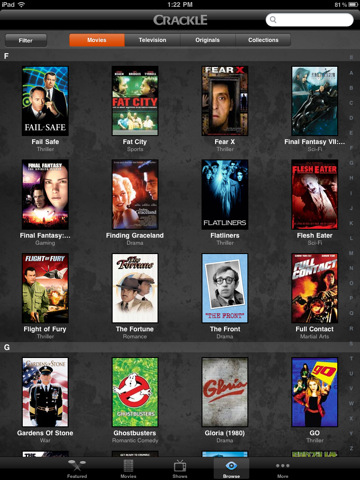 There are actually some really good movies in the Crackle app. For example you can watch The Da Vinci Code, Snatch, Charlie’s Angels, The Fifth Element, and Bad Boys to name a few.

To test out the Crackle app, I watched the Adam Sandler movie Reign Over Me on the iPad 2, hooked up to the TV with the AV cable. The output is actually quite clear, although it does not fill the entire screen, which would be nice. This movie is 2 hours and has 11 advertisements, so there is one ad about every 10 minutes. The 30 second ad was always the same one, for an upcoming video game. Hopefully Crackle can attract some additional sponsors soon. Another small issue, is the ads just randomly get thrown in without any warning, sometimes in the middle of a line. It seems like the placement is computer generated. If a human would place the ads in at meaningful times, it would be a better experience for viewers, and they would probably sell more ads. 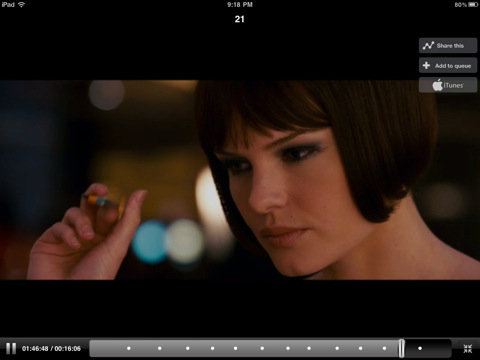 The video is in a box along with the movie’s description and some recommended movies. Double tap the video to go into full screen mode. While in full screen mode, tap once to see the controls. A slider lets you skip around the video, and small dots show the ad breaks. There is no volume control so you have to use the device’s hard buttons for volume. If you sign up for an account, you can add movies to your queue to watch later.

If you quit out during playback, the Crackle app asks if you want to resume where you left off or start watching again from the beginning.