Even with a temperate region such as Los Angeles, residents still like to check the weather forecast to plan their days ahead (you know, just in case it gets even sunnier). Prior to the Internet, we were chained to announcers on news stations and radio channels, but no longer! Now we can just hop on to the nearest Internet-capable device and have our forecast in the matter of a few keystrokes.

App Jon’s QuickWeather app is available for such query. Not only does it display the temperature in a highly accessible manner–the numbers are big enough to be seen even by my blind eyes–but it is also accompanied by gorgeous backgrounds to reflect the current conditions. These backgrounds change whenever the weather does, as well as switching from night to day. Current conditions can be unveiled by tapping on the words at the bottom on the screen. A detailed menu will appear with 8 different elements (tap anywhere to close the menu). To change locations, tap the info button on the bottom right and find a new location by city, zip code, or GPS. You can also change between Fahrenheit and Celsius in this menu. 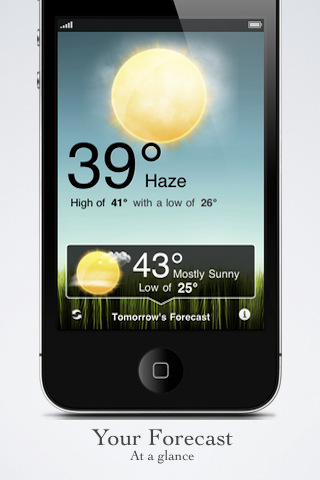 Although the graphics of this app are flawless and the controls smooth, QuickWeather is a bit too simplistic for my taste. For one, the main page doesn’t state the current location, nor does the app allow you to save locations. Even the default iPhone weather app has this basic function–there’s absolutely no reason for it to be excluded. QuickWeather is an app for a user who plans only as far as tomorrow, because that’s as far as the forecast extends. I know that forecasts are highly changeable, but some idea would be nice. If all you’re looking to do is to see what the day is going to be like, QuickWeather should make you pretty happy. But if you’re going to for functionality over glamour, you could probably find another weather app for free.