Regular Berry Software, LLC’s Algebra Touch Intro – Order of Operations App for iPhone, iPod Touch, and iPad clearly and succinctly explains and tests basic principles of algebra. Educational apps are not necessarily the glamorous, fun gaming and social media apps normally associated with iPhones, iPods, and iPads, but they make learning even the most basic principles modern and approachable.

The Algebra Touch Intro – Order of Operations App for iPhone, iPod Touch, and iPad helps you save some serious face with your kids. The app explains basic algebraic principles to those of us who haven’t been in a math class in twenty years—or more. This app addresses addition, terms like and unlike, negatives, multiplication, and order of operations. Algebra Touch Intro has two sections. In one, principles are demonstrated and explained. In the other section, there are practice problems to reinforce each principle. You can move between each section by simply touching an icon at the top of the screen. 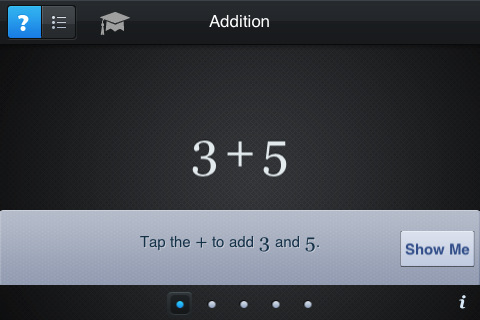 The Algebra Touch Intro doesn’t just share the rules, but it explains why rules are rules. The app starts with the simplest expression of each principle and progresses through to more complex expressions by touching the screen. As you move from problem to problem, the function is explained cogently and completely. For subtraction, the Algebra Touch Intro app encourages the user to think about adding together negative terms. You can quickly access the order in which you solve terms in an algebra problem. Those details are the kind that escape your memory when not used.

The keystrokes you use to solve the problems are clearly explained and intuitive. To add functions, you touch the + sign on the screen. To move like to like, you drag numeric terms together with your finger. If you are unsuccessful with a problem, the reason you are unsuccessful is explained at the bottom of the screen. The graphics are basic, and it’s not a flashy or visually stimulating app. But, that’s math, isn’t it? 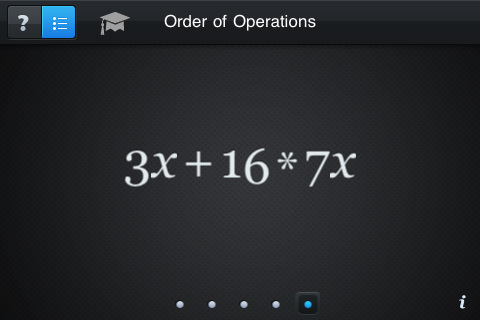 My five boys have math homework every single night, and principles of algebra are introduced in elementary school now. The Algebra Touch Intro – Order of Operations iPhone, iPod Touch, and iPad app helps you make your kids more successful in school. Whether or not you choose to share with your family that you need to refer to an app is up to you. You can quickly access and refresh your order of operations memory in a couple of clicks—just about the same time as it takes to pour a glass of milk. Or, you could use this educational app as a form of punishment. If your kid doesn’t turn in that math homework that befuddled you, then you can crush his gaming soul by restricting him to just the educational apps–especially Algebra Touch Intro.