Twitter users know that there are apps upon apps that can be used to tweet with an Apple device, one of the biggest being Twitter for iPhone, the official Twitter app birthed from the buyout of Tweetie. Another addition to the Twitter app family is Fabian Kreiser’s Icebird for iPhone, an app that will make tweeting “a real charm.”

Once logged in with all your accounts, you will be able to switch between them simply by swiping left and right on the home screen. All the essential features are there for you: your timeline, @replies, DM’s, Lists, Favorites, and the Search function. Down at the bottom of the screen is a menu that pops up when the arrow is tapped. In it, you can find out the trending topics, edit accounts, and adjust your settings (including choosing between multiple image and video services). For nearly all of the screens off of the home screen, you will be able to compose a new tweet just by tapping the button in the upper right corner; the inbox icon in left corner on the home screen will take you to all your saved drafts. Icebird gives you three extra options while composing: choosing somebody from a Following list, geotagging, and taking/choosing a photo to upload. 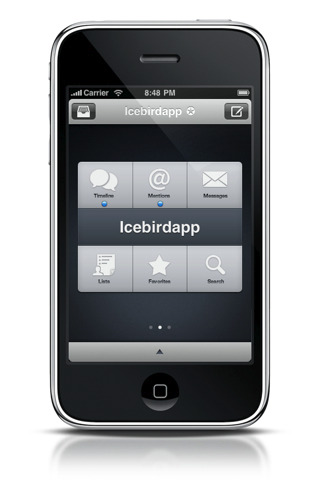 When in your timeline, tapping and holding a tweet will bring up a small menu with three options: Reply, Retweet, and Favorite. Tapping the tweet will give you even more, such as showing conversations and a Translate ability. Tapping the user’s name on top of their tweet will take you to their profile. From there, you can view all their recent tweets, block them, follow/unfollow, and manage their incorporation into your Lists. If you need to view your own profile, go back to the home screen and tap on your username–you can edit your profile from there. For any given screen, holding it and pulling it down will refresh it; all screens can be viewed in both portrait and landscape orientation.

Icebird for iPhone doesn’t bring anything particularly new to the Twitter app table; in fact, there are a few other Twitter apps that are quite a bit more loaded than Icebird. But what it does have going for it is easy functionality and a fantastic interface. All the basic Twitter needs are addressed, and arranged quite beautifully on the home screen (the color-coded tweets don’t really do much for me, unfortunately; I find them to be clashing and distracting). One of the best features is the ability to switch between accounts without hassle. No longer will you need to backtrack through several screens to do it–now you can just swipe. Icebird’s design fits flawlessly within the Apple-sphere it was designed for, and is perfect for those who aren’t heavy Twitter users, who check in maybe a few times per week.