When your app name becomes a verb, you know you’re on to something good! When I first opened the Songify iPhone app up, I was thinking that I had to have musical talent to even think about doing anything beyond being horrible with it. But I was sure proved wrong. Songify (developed by Khush who previously released the LaDiDa iPhone app) is a clever, fun, iOS music application that requires almost no talent with singing, but can still make you sound good and entertaining. 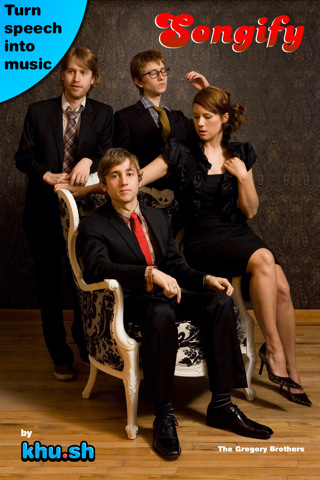 The concept of this iPhone app is fun, and I’ve seen a couple similar ideas before it, but this one just has a different feel. Most of the other apps don’t auto-tune the voices and require singing skills, making them unusable for the general audiance of people who can not sing.

With Songify you can save the favorite songs you create, share them to Facebook/Twitter, and you have the ability to email them to all your closest friends and relatives to prove that you can sing. This application starts with only three types of music tracks you can use, but I think that they have almost unlimited re-use value, and unless you plan to become a YouTube phenomenon (which you very well could be with this awesome program), you might not ever need or use any of the downloadable content. 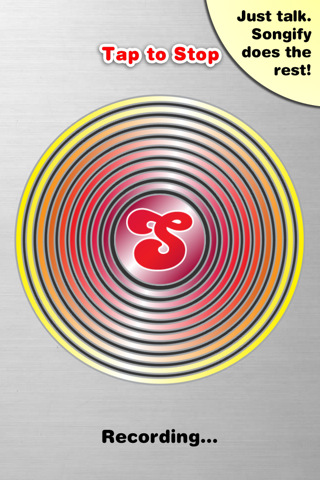 The audio content is perfect for anyone with an iHome, or anyone using headphones. It has a nice, professional sound to it, not emphasizing any part too loud, and not making any part of it too quiet. The navigation is simple, but can take some getting used to, while changing the track you will be recording with your voice. There aren’t that many things needing graphics in this app, but the main thing is the spinning record as it is recording your voice, which shines in different colors, and slowly spins, giving you something cool to look at.

The age group for Songify would be around 10-18, mainly for the lack of “sophistication” that adults crave, but I would still reccomend it to any adult who wants to feel younger again, or just mess around a bit and have a good time.

Currently, Songify is free on a promotion, but it will soon go back up to a paid version. If you don’t get Songify while it is free, do not hesitate to buy it, even when it costs a dollar. You’ll experience endless funny moments and it will pay off over time. All in all, Songify as a unique music generation app for the iPhone and iPod touch. It is a great buy, and awesome to play around with it while with friends. And maybe you can even make it to the top rated songs one day or become an accidental artist. Songify away!