Expelliarmus! Protego! Alohamora! Oh, whew, sorry, didn’t see you there. I was too busy practicing spells with my magic wand. Oh, what’s that? You don’t have a magic wand? Well, why not? Oh, my goodness, you’re not a Muggle are you?

Okay, so, back to reality. As you might imagine, this is the kind of app that is probably only going to appeal to Harry Potter fans, but I’m willing to bet that’s more than a few of you. The problem is, the app is banking on this, and it doesn’t come with a lot of content. Anyone who is hoping for something other than a rather complicated stick to wave around while pretending they’re a wizard will be disappointed. 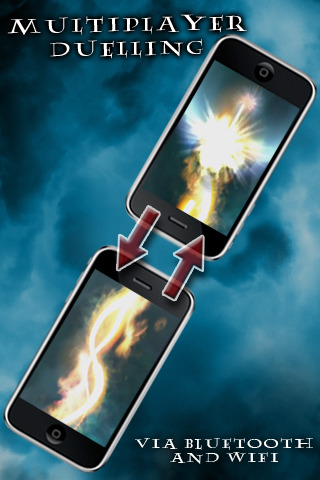 When you start off, the game, if you can call it that, asks for your name and sends you a letter inviting you to Hogwarts. The Sorting Hat randomly sorts you into a House, and then comes the schoolwork: spell learning. It comes with 14 different spells, most of the ones you’d expect and a few you might not. The spells are divided into four categories: offensive, defensive, healing, and non-dueling. Adequately master these spells and you can use a few of them in duels. You can either duel against the computer, over the Internet, or against nearby devices via Bluetooth, if they also have the app installed.

You have a choice of using touch or motion controls to cast spells. Naturally, you want to be able to wave your iPhone around just like a wand, but I’m going to have to burst your magical little bubble. First off, no waving. You have to wield the iPhone as if it were a giant piece of chalk you’re trying to write on a blackboard with. It’s a very stiff sort of movement that will make you look quite insane in public. Second, the accelerometer just isn’t quite up to snuff, so if you even cast the intended spell, you’ll be lucky. The touch controls are perfectly adequate, but where’s the fun in that?

The look and sounds of the wand and the accompanying animations for the spells are fantastic, but beyond that, the magical feeling of the books is painfully absent. There is no sense of story, and dueling gets old very quickly. There is some cursory nod to House competition, but since you can keep reloading the Sorting Hat until you finally get into the House you want, the balance, as you might imagine, is heavily shifted in favor of Gryffindor.

I am a big Harry Potter fan, so I really wanted this app to combine some of the magic of Hogwarts with the magic of technology, but I’m sorry to report that I was disappointed. If there were a few goals aside from just dueling, I might have enjoyed it more, but as it is, I wouldn’t recommend it to any but the most dedicated fan.