Did you ever wish you were a superhero when you were a kid? Traplight Games’ new, aptly named action app allows you to play the superhero in The Hero. You’ll play as the Hero, an A-list celebrity who is recruited by the Chief to save different cities from a takeover by evil Dr. Hubbub. You’ll fly through the skies using a d-pad or the tilt control (if enabled) and rescue civilians. You’ll also work to defeat Dr. Hubbub’s henchmen with your special powers, all while trying to maintain your popularity amongst adoring fans.

This app offers high production values all around. You’ll defeat villains with your Freeze, Boom, and Zapp super powers in two different gameplay modes: Campaign or Survival. In the Campaign mode (which is like a story mode), you’ll fight Dr. Hubbub’s crime wave in four different metropolises around the world. For the Survival mode, you’ll go head-to-head with an endless onslaught of Dr. Hubbub’s henchman. You’ll also be able to play in two different difficulty levels: easy and hard. So if you do defeat the game under easy, you can play again under hard. The game never gets boring even if you defeat the story mode under both difficulty levels. There are over 20 different villains to battle, and over 20 different wacky awards to collect. Controls were intuitive and very easy to use. The tutorial at the beginning of the game was comprehensive and to the point. 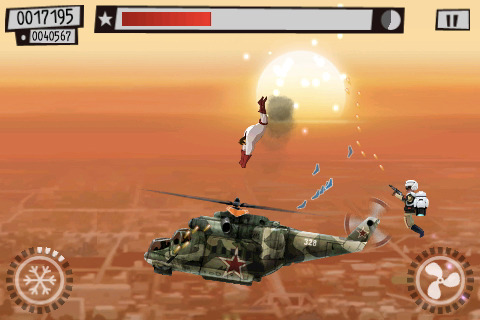 The graphics and sound effects were fantastic. The 2D visuals were highly detailed and made the game a pleasure to play. I felt like I was inside a comic book. The game kept me engaged through the first 6 campaign levels I played, and I can’t wait to finish the other 9 campaign levels (there are 15 campaign levels total). The different soundtracks for each campaign level also added interest and kept the game from getting too boring. I just wish the music loop lasted a little longer because it can become a little grating at times. Availability of online leader boards via integration with Crystal made play somewhat addictive, but I wish the game was integrated with the more popular OpenFeint. I just hate having to create separate accounts.

The Hero is a fantastic app. I think it could be even better with a few more changes. Firstly, I’d like to see controls added to adjust sensitivity because as is, they are too sensitive for me. The Hero often moves too far for me when I use the d-pad or tilt control. I would also like the ability to adjust the size and placement of the d-pad. I’m a right-handed gal and the location of the d-pad on the left throws off my gameplay. Response times end up being a little slower which is time wasted when I could be saving falling babies or freezing spiders. The ability to increase the size of the d-pad would also be much appreciated because I often end up hitting “up” instead of “right”. Thirdly, I would love to see a few more animations. Right now, the Hero just hits things to catch babies, hi-five fans, stop villains, etc. There’s not too much going on except items falling, crooks running, and fans waving. Please add more animations, developers! Finally, I would like to see continued updates with more campaigns levels, super powers, achievements, and villains.

Overall, this is a great buy for $1.99. It plays pretty well, looks good, makes you laugh, and offers lots of replay value.