A color-coded gem with a fresh gameplay gimmick and shiny graphics, Wispin is a repetitive, but attractive treat for the eyes. (Color-blind gamers will be happy to know that there is a display option for them too.) An action puzzler with a much heavier emphasis on action than puzzles, Wispin relies on cat-like reflexes and a firm grasp on primary colors to eliminate the Blooper menace invading his digital domain.

But what is a Wispin? He’s an adorable blob of a hero with an unusual special ability. Thanks to a Simon-like wheel in the corner, he can quickly change his color with a tap. His enemies, the Bloopers, come in specific colors, and when Wispin matches their color, he’s able to crush them into oblivion. Of course, there are lots of them and only one of him, so you must be quick lest Blue Wispin find himself overwhelmed by Red and Green Bloopers. Along the way, Wispin can unlock other special abilities, like weapons to lob at the incoming hordes. 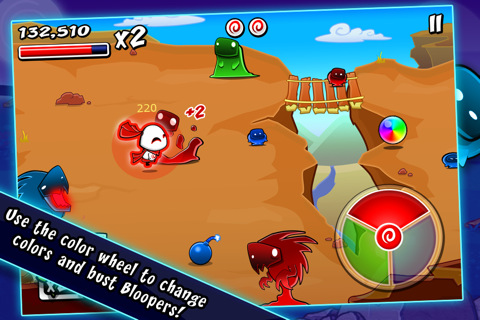 Although the game is rather light on story, the character designs ooze personality and charm thanks to the sharp and bright graphics. The environments themselves are predictably bland so as not to distract from the rainbow of villains Wispin encounters, and the villains are worth showcasing, as they’re beautifully animated, although there isn’t a lot of variation between them.

Like in a tower defense game, enemies come in waves, but there is nothing to defend aside from Wispin himself, and the goal is simply to defeat everything. As such, the game starts to feel repetitive rather quickly, with each wave always feeling like a slightly harder version than the last. 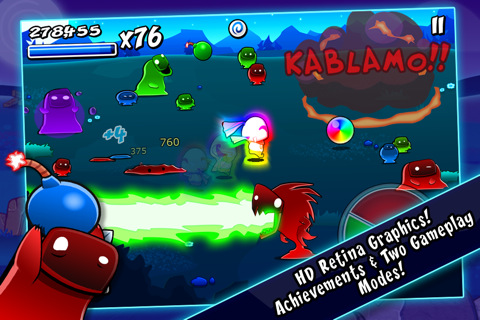 You have a choice between tilt controls and using an onscreen joystick, but neither of these is quite perfect. Wispin isn’t an especially tough hero, so you really want to get good at dodging and switching colors on the fly, and this can be tough when the controls aren’t quite as responsive as you would like. Surprisingly, I enjoyed the tilt controls a little more, although their precision leaves a lot to be desired, particularly when you’re trying to line up ranged shots.

In addition to sluggish controls, Wispin rather disappoints on overall content. With really only one gameplay mode and a slightly harder unlockable area, although I liked the color-switching gimmick, the action itself felt slightly stale after a short time. Game Center-integrated leaderboards do a little to motivate replay value, but ultimately, although the game really looks quite stunning, but the action is only ho-hum. Not a bad game, but a little too much form over function.