When I see the name “Goro”, I usually think of the hulking four-armed fighter from Mortal Kombat, so I was a little surprised and amused to see the name attached to such a small and adorable blob-creature instead.

The story of this impossibly cute game starts out like this: the titular hero was created for a promising platformer long ago, but his developer abandoned it in favor of an FPS and banished Goro to a dull video game purgatory. Luckily, Goro spies an advertisement looking for a hero and is more than ready to take on the job.

You’re there to help Goro achieve his dreams of video game stardom, which means guiding him through the various levels. Along the way, there is plenty of running and jumping, as well as enemies to defeat, and to help you navigate through the ever-perilous platforms, there are four buttons. In the left corner are the arrow buttons to control movement, and in the right corner are the jump and fire buttons. They do take a bit of getting used to, but I was actually quite pleased with how the game handled.

Less satisfying were the enemy encounters. Much of the time, it’s a non-issue. The enemies are cute and sometimes challenging, but not impossibly hard. The problem arises when you attempt to jump across to another platform and die because of an unseen enemy. The amount of the screen you’re able to see is very limited, so these kinds of blind jumps are frequent, and when you die, you start over from the beginning of the level. This can get very frustrating, especially if you haven’t quite gotten the hang of the controls, so I died quite a bit at the beginning. 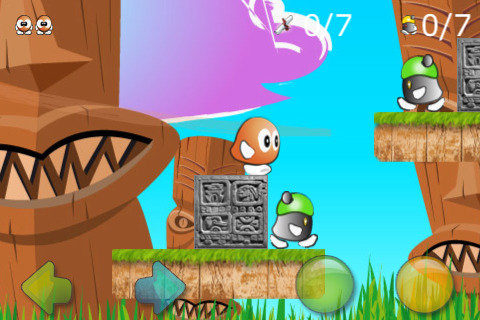 The full visual appeal of the game really doesn’t kick in until later, as early levels have a very stark, industrial feel to them, but later levels are very bright and colorful. The game became more charming and engaging the further in I got, so it is surprising and a little disappointing that the initial levels are so lackluster, but that gives you a definite incentive to stick with the game.

As platformers go, Goro’s Way is fairly basic, but it is also super-cute and kid-friendly. Dying is definitely a setback in the game, and it happens fairly often, so it may not be the best choice for you impatient ones, but if you’re looking for a solid and attractive platformer, Goro’s Way delivers.