“Hack and slash”–they’re three of the most influential words in gaming, and the guiding principle behind Monstro’s Deadly Dungeon. Come in expecting an epic storyline and well-crafted characters and you’ll be setting yourself up for massive disappointment. If, on the other hand, you’re more interested in ceaseless carnage and violence, then you’ve come to the right place.

Despite not being the most intellectual gaming genre out there, hack and slash games can be plenty entertaining and let us tap into our primal desires to skewer bad guys into oblivion. If you’re just in the mood to misbehave Conan the Barbarian-style, then clever puzzles and witty dialogue aren’t required, and Deadly Dungeon totally gets that. No story necessary, just you, a sword, and a whole lot of baddies. 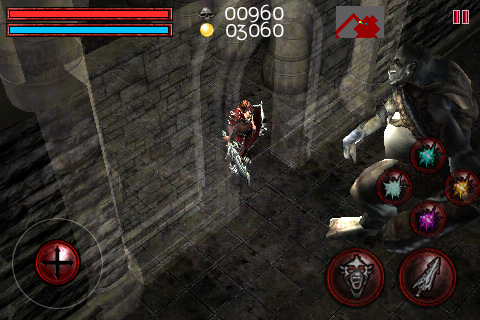 From the very start, the game looks fantastic and sets you right up for some magical violence. Dark and detailed environments do a fantastic job of setting the “deadly” mood of the dungeon, and the simple controls let you leap right into the action. An analog stick and a couple of buttons are all you really need to throw yourself into battle. There are four smaller buttons for powerful magic spells you unlock as you progress through the game, and they provide some pretty nifty area effects, but your sword and shield are the real mainstays.

The controls do a reasonable job of providing smooth movement, but attacking is a bit hit or miss. Instead of sharp, precise kills, it feels a lot more like wild flailing that magically connects. There isn’t a ton of variation amongst the enemies, and they go down a bit too easily, so the battle system doesn’t really stand out as a satisfying challenge.

For each level, you have to kill most of the enemies to unlock a glowing portal that will take you to the next one, but since you collect precious gold from slain baddies, it’s in your best interests to do a complete sweep of the level before moving on. There are also treasure chests to collect along the way. In terms of layout, all the levels are roughly the same, and while they look great, navigation can be tough thanks to imperfect transparency issues with the walls and pillars.

Unlike the exceptional and very difficult 100 Rogues, character leveling and weapons customization in Deadly Dungeon is a bit of a letdown. There is only one character type available to you at the beginning, and it’s much too easy to beef him up, hit the level cap, and just breeze your way through the rest of the game.

Bottom line: Deadly Dungeon looks great and is definitely fun at first, but the fun runs out all too quickly. At the low release price of $0.99, it’s not bad for a little taste, but the game really needs more levels, monsters, and characters before you can really sink your teeth into it.