Dungeon Hunter 3 is an action RPG from Gameloft, which can be played on the iPhone, the iPad, or the iPod touch. In the game you are given the choice of four different classes, and then you’re sent off to kill enemies and earn achievements in the various locations present within the Dungeon Hunter world.

Let me start off by saying that the graphics in Dungeon Hunter 3 are pretty fantastic for an iPhone app. Though they aren’t necessarily the sharpest, they definitely are gorgeous and they really nail home exactly what they were going for. Overall, the graphics pretty closely resemble a style akin to the Diablo series. Unfortunately, the gameplay does not. 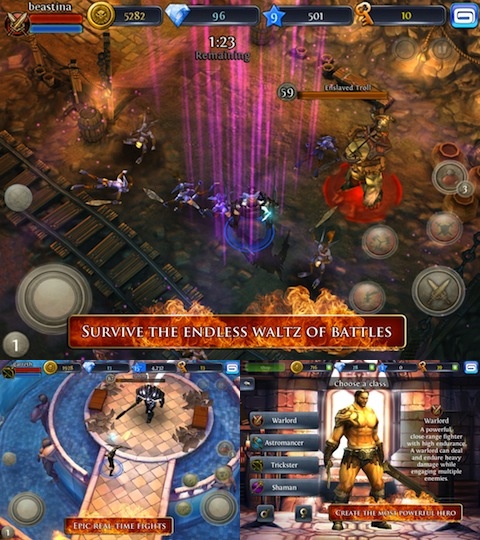 There is quite a bit of customization, allowing you to equip armor which adds different bonuses to your character while also changing the way that they look while they’re fighting on the field. However, with the addition of four different classes I was kind of expecting to see some sort of manual skill tree, or some way to level up your characters that didn’t involve upgrading or buying various sets of armor. Unfortunately, all leveling up is done automatically, so you have almost no control over how your character progresses.

The two toggle controls can serve to be pretty confusing, and at times I ran into a bit of a glitch where the app itself was forcing me to attack in a different direction than I wanted. I also found myself accidentally switching my weapons every so often, because the button to activate that command is not even a centimeter away from the joystick you use to move around. The entire control set up is just not very easy to manage, which is a big disappointment in what could’ve easily been a really fun app. 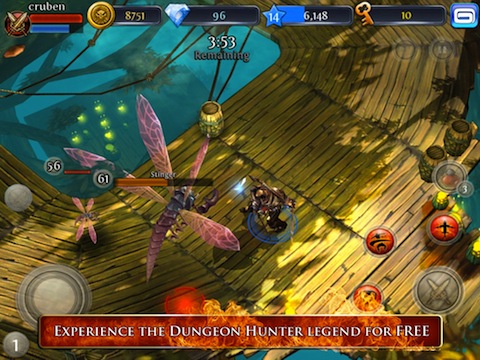 I wasn’t a huge fan of the overall point of the game, as it ends up being more of a run-around-while-holding-down-this-button-until-you-win situation. And while those can be fun for a few minutes, I easily get tired of them and want to move onto something more expansive and less frustrating.

At first I’d written off the entire thing as something I’d probably delete in a few days, especially considering the fact that it takes up a generous 844MB, making it the largest application I have on my iPhone while also having a 600MB lead on all of my other apps. However, upon further review of the entire thing, I can definitely see how I might enjoy playing through a few levels every now and then.

Overall, I’d say that it’s worth trying the app out, if you actually have the space for it. Though definitely not the best app out there.