I picked up Dungeon Hunter HD from Gameloft a couple of weeks ago when it was on sale for $.99. But after playing all the way through with the warrior I have to say it’s worth even more than the $4.99 regular price on iTunes.
What a blast! And I fully intend on taking the Rogue and the Mage through the game as well. Getting my money’s worth big-time!
This was my first experience with an RPG on the iPad and it was not a disappointment.

As the game starts you are walked through the steps to create your character. There are slots for four different characters to have multiple games available in different stages. After naming the character you are directed to select the type of character including Warrior, Rogue and Mage with small descriptions of that means for the game. 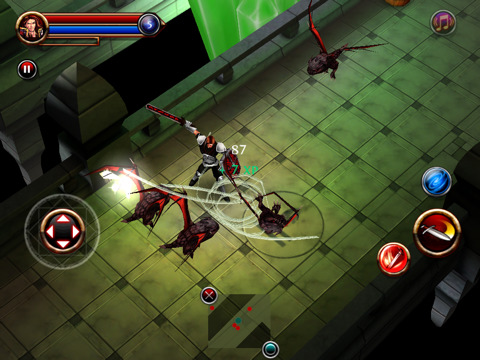 Dialog is advanced by touching the screen with text paging through set up of quests. The first few tasks set up the controls and how to advance in the game. The music and sounds are Gothic and especially enchanting with headphones. And now you are off and battling evil in all its gory glory.

Everything needed is well-placed on the screen with life, magic levels and pause in the upper left, expandable map and combat buttons on the right. The “joystick” to move about is on the bottom left. I found it easiest to use my thumbs to control the character and my fingers to support the iPad. Other combos make work better for others. 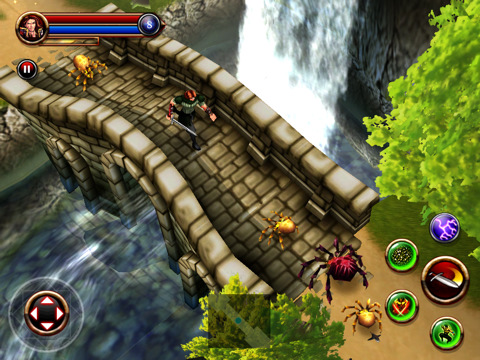 The basic story is a prince, newly married, but quickly killed by his conniving queen. He is then ‘awakened’ by the faeries and the quest begins to regain his kingdom and his life back from the evil queen.

Moving through the screens you encounter various enemies, from spooky spiders to the undead. When vanquishing an enemy they leave behind goodies of various flavors, such as gold, rings with special powers and weapons. These items can be sold and then buy others at various vendors throughout the game. I found the best weapons and talisman through gameplay, and rarely bought anything other than life potions from the vendors. I usually just used the vendors to sell off my inventory so I had room to gather more.

Moving through the stages you encounter chests and barrels that can be destroyed or opened which yield items to help you on your way and add to inventory and to enhance battle equipment.

Like most RPG’s as you gain experience dispatching enemies and solving quests, getting to upgrade the character’s skillsets. If a warrior, you should probably weight toward changes to strength, if a Mage, to energy. You also get awarded levels to add to various skills such as swordplay or defense. The scoring and character building is very much in line with D&D.

The items gathered are added to inventory which is accessible anytime be tapping on the character’s icon in the health bar. The first page details statistics which including attributes and where points can be added when gaining a level. The next screen shows how your character is equipped and what is in inventory. I found this section a little confusing at first, but found myself very satisfied just using the “auto-equip all” button. This auto-places the best gear on the character without having to walk through each item. However if so inclined, it isn’t difficult and the developers made it very easy to compare items toggling through the equipment. 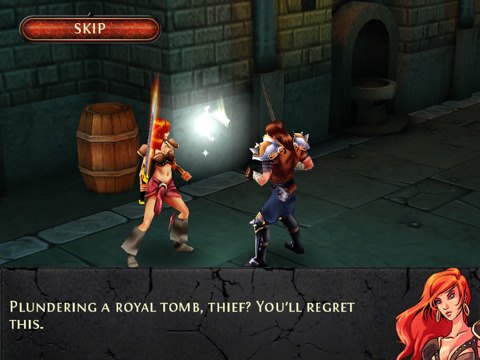 The next screen in the character area is for skill mapping. Here adding points gained from levels to fine-tune skills. Add a fighting skill to the warrior or a spell type for a mage. Next select the fairy that accompanies the character on his travels. As you complete quests, the fairies are freed from their imprisonments. As they are, the faeries imbue the character with abilities to combat different beasties. The game starts out with Celest a Lightening Fairy accompanying the prince. She gives him the power to strike lightening bolts at enemies.

And finally, there is the quest screen. If in haste to battle baddies you happen to forget what quest is to be accomplished you can refer back to this screen for a refresher and get back on course.

So now all that need be done is to do is slay the baddies, gather up strengths and fight the way to defeat the evil queen who has stolen the throne.

I found that navigation while perhaps a little confusing to begin, this game quickly became easy and straightforward. I found it very difficult to put down Dungeon HD at times and to force myself to stop for the evening allowing me get some sleep before work.

If you like RPG I highly recommend Dungeon Hunter HD.