Medieval Heroes is Risk with training wheels meets an iPhone, iPod Touch, or iPad app. The game is all about conquering territory and building on your new land. Like any other game, the more you have, the more likely you are to win. This is a turn-based game so you play against the computer. The game is fun for a while, but there is not much room for creative strategizing. You have the option to spend $2.99 on the original or get Medieval Heroes Lite for free. 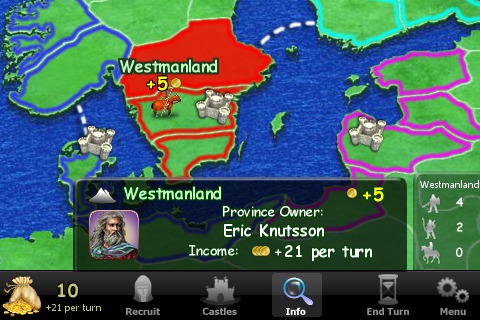 You start out by choosing a map from the options: Holy Roman Empire, Muscovy, Medieval France, Norse Raid, Northern Lands, Medieval Europe, etc. The differences between the maps are found in the number of provinces and players. The more players and provinces in the map the harder the game gets. Then you have to pick out a hero—from groups of lists that are coordinated with the maps—to command your troops. The historical heroes include, Charles IV, William of Holland, and Ivan III, among others. You are also given the option to play with a game difficulty level of easy, normal, hard, or expert. Once you begin the game, you are given 15 gold coins to start your army. There is a task bar at the bottom of the game with the options to recruit troops, build a castle, get an overview of your information, and end your turn. A swordsman costs 3 coins, an archer costs 9, and a knight costs 15.

Once you form an army, you can only conquer provinces that border your territory. When you attack a province you use up your turn and before you go to battle you are given an overview of the opponent’s army. Winning provinces also fills up your gold coin sack. When the game gets more complex and you go to attack the computer’s territory you have to pay 7 coins to “scout” the opponent’s forces. An important part of strategizing is to keep a certain amount of forces in each province you conquer in order to prevent enemies from coming in and reclaiming the land. Another thing you can do to maintain the area that you have fought for is to start building on it.

Medieval Heroes is fraught with barriers that prevent the player from sophisticated strategizing, which makes the game become monotonous after awhile. The bottom line is to buy, buy, buy: Build your army and build castles.