Modern War is a new iOS game from Funzio, with gameplay similar to Crime City but this time with a military war theme and a few new additions. Just as with other iPhone apps in the turn-based social crime game genre, you build an army, join forces with other users online, invade enemy territories, add your friends, build a base and army and expand your virtual military empire. Although the games have a lot in common, Modern War differentiates from Crime City and Grand Theft Auto III, in that now you are less of a city criminal and more of a military personality. There are now even missions for taking down terrorists and joining forces with others to defend your territory. 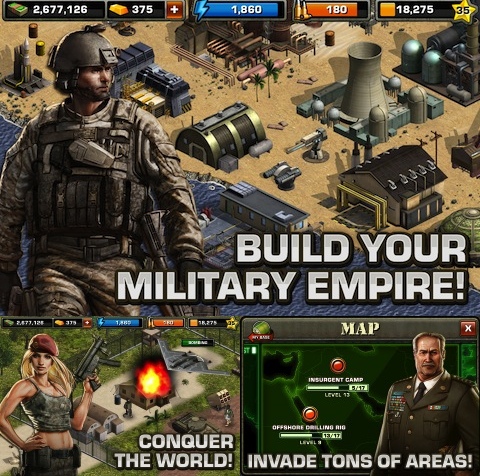 The load time after launching the app is short. Before you start playing, you can choose from several avatars. There is a good selection of male or female avatars to choose from. I like having these options even though the simple, old school graphics are harder to see and you can’t really see your avatar anyway. There is a small tutorial before you start playing Modern War that helps your figure out what you need to do and how to control the game, which is pretty user friendly.

The concept in Modern War is simple. You are a soldier fulfilling various missions. It is entertaining and simple enough to play while you’re waiting, taking the bus, or stuck at a train station. The combat is also easy. You don’t have to actually fight your enemies; you just tap the enemy and the app tells you whether you’ve won or not. This may seem boring, but it is a good combat style for an iPhone game. 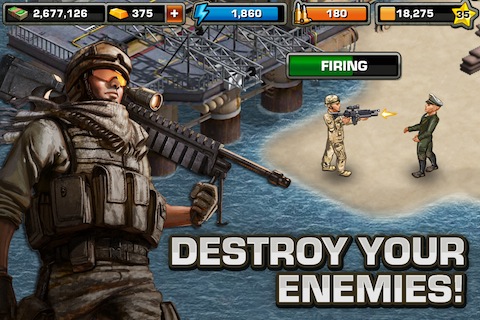 The controls are really user friendly and efficient. Most of the time, you engage people and items by tapping the screen, much like with other iPhone apps. In order to move your character, you tap the screen where you want him or her to go. To move and place buildings, you just drag and drop. The controls are easy and the response time is good. The app does not lag in regards to movement and control. One problem I have noticed when attempting to move the screen around is that the app is pretty sensitive to touch. Sometimes when trying to zoom in and out, the app thinks you are trying to move a building or talk to someone instead. This then brings up a prompt to move the building or talk to someone, thus ruining your attempt to zoom in or out.

The app does not include audio. I think it would add to the experience if there were at least some sound effects. I am not a big fan of repetitive music in applications, but I would like some effects when I move, fight, attack, and interact with other characters.

The graphics in Modern War are decent for a social game. During my play through, I did not see any noticeable glitches or problems with the graphics. However, when you zoom in as far as the app will let you (which is not very far), the graphics do get a little grainy.

Modern War is completely free which is a great value, and is better than some other paid games in this genre. If you are impatient, you can spend in-app purchase money on bags of cash and gold, just the same way as you did in Crime City. Modern War is a game you can play for weeks, if not months, on end, join forces with other users while you build an empire. Modern War is a universal app download and works on both the iPhone/iPod touch and the iPad.