In concept, Venture Towns is really no different from any other city simulator. You start out with a limited amount of resources and just one resident, and from there you develop a city and its economy as you see fit. There is no point where you “beat” the it, you instead just play it and see how successful you can be. The overall goal, of course, is to build the biggest and most profitable city possible. 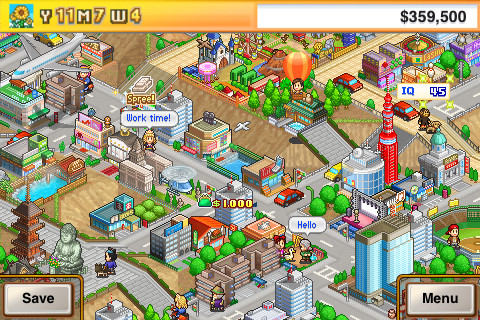 Like other games in its genre, Venture Towns makes use of a point system to assign attributes in your town. You decide what industries to build in and, to a lesser degree, how the residents of your city will act. This gives you plenty of control in deciding what your city will end up like. There are many potential pitfalls throughout the course of the title though, and you’ll have to exercise good strategic sense to keep your town from being a disaster.

The controls in Venture Town are logical, and really make Venture Town easy to play on an iPhone or iPod Touch. Pinch-to-zoom is employed in full force here, and you just have to swipe to move the camera across your city. Not having to fumble around with a ton of on-screen buttons makes a world of difference here. There are only two buttons on the screen, with a menu system employed to make changes to the city. The controls are as intuitive as it gets. 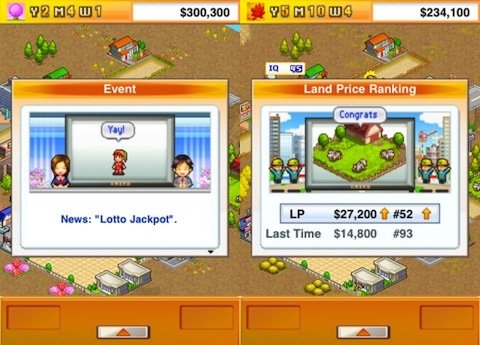 One of the best traits about the application, though, is the graphics and sound. The visuals are decidedly reminiscent of old Super Nintendo games, bringing a sort of nostalgia to iOS. The sound goes hand-in-hand with the graphics. The music is quirky and catchy, and is repetitive without ever really feeling repetitive. It mimics the old-school 2D games perfectly and really creates an environment that you might find yourself spending hours in without ever noticing.

Everything in Venture Towns is top-notch, and people who have played Kairosoft games in the past probably know to expect no less. The title is steadily addictive, only roping the player in more as time is spent playing it. It’s great because it can be played for hours on end, or just for a few minutes when there’s nothing else to do. At only $2.99, it’s a steal. Any fan of simulation games who owns an iPad, iPhone or iPod Touch should consider picking it up.