Fortis is a shooter game that involves shooting lasers whilst guiding a jet from the future. The plane in this game looks like something out of Space Mountain and the terrain reminds me of a Star Wars battle: Gladiator fighting pit meets sci-fi buildings.

I found the perspective in the game to be offsetting. It is bird’s-eye view and I think that for shooter games the first person perspective is always the most fun. Another thing about the game that I didn’t particularly care for is that the jet stays relatively stationary. The terrain changes slightly—lava or glaciers—when you move up the levels but you aren’t flying anywhere; you fly the jet around the same area, so you aren’t moving towards anything. On the left and right sides of the screen there are 2 circles, or “thumb sticks” for you to maneuver the jet’s steering and shooting, respectively. In the upper left hand corner are the fuel and ammunition levels and your score is in the upper right. You can control the speed with the pace of your finger. When the game starts, your jet is surrounded by spacecrafts shooting lasers and meteor-like firebombs at it. After the completion of each level, the game store pops up offering upgrades and ammo. I found there to be a problem with control of the steering and shooting and the design seems unnecessarily hard when it comes to coordinating the two. Then again, I may just be bad at synchronization. 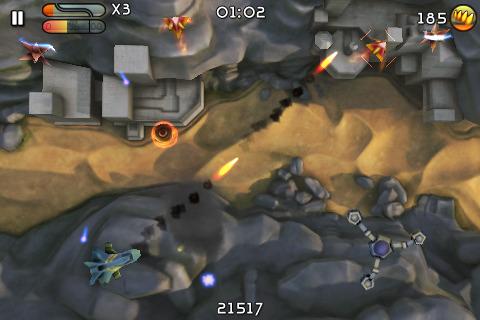 To be 100% honest I lost interest in this game 10 minutes after I started playing it. In essence, nothing about Fortis has me coming back for more. I’m sure you can find another way to spend $0.99. The game boasts a lot of different features like, 36 levels, 3 stages, bonus stages, ammo shop, 3 player profiles, but none of it could save it for me. I would suggest giving this game a try if and only if trying out each and every shooter game out there is on your bucket list.