One of the best uses of an iPhone or iPod Touch’s accelerometer, in my opinion, is to effect flight simulation. dobesgames’ game app, Heli Navy – Terror Defense, is one of the latest releases featuring such an ability. In the game, you are a Navy pilot defending cargo ships from pirates who would hijack and ransom the goods.

To prevent that from happening, your job is to shoot the pirate boats down; you are given mounted guns and rocket launchers to see your task to the end. For each pirate boat you shoot down, you receive a cash prize. Controlling the helicopter is as simple as moving the device around: tilting up and down, left and right, will steer and move the helicopter accordingly. To shoot, the left side of the middle section to use the gun and the right side to launch a rocket. Tapping the far right middle will change your point of view to the cockpit. Other controls can be found diagrammed in the Help section. 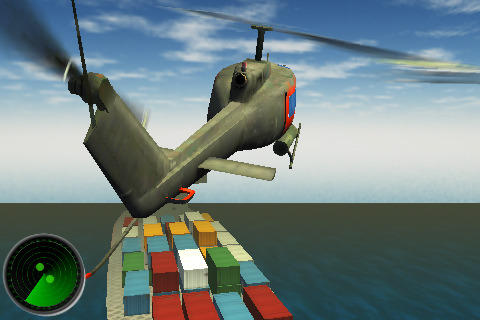 Heli Navy gives you five areas in the globe to defend the cargo: The Straits of Malaka, Somalia, Colombia, West Africa and the Suez Canal. Tap the globe and drag your finger to spin it, find a red pin indicating one of those locations, then tap on it to start the game. You get five lives, so don’t nosedive into the ocean, crash into something solid, or get shot down by the pirates. If you’re particularly proud of your results, you can publish them on Twitter.

Heli Navy is a cool concept, but dobesgames’ execution is a bit off the mark. A list of buttons and their fixtures does nothing for me–explain what each one does, especially when you have Up and Down buttons, but can do that by tilting the device. If they do the same thing…well, that’s a bit redundant, now, isn’t it? The soundtrack is forgettable (and personally, I found the repeated sayings somewhat annoying), and the 3D graphics could stand a little polish, but you only have a handful of things to look at, anyway. And this is all when the app actually loads–it’s as prone to crashing as Los Angeles highways are to congesting. Heli Navy needs some serious upgrading before I’d spend $0.99 to buy it.