I’m a little weirded out by the timing of Army of Mice, a game for the iPod Touch, iPhone, and iPad because I’ve been having dreams about mice for the past few days. Suddenly I’m playing a game that entails killing them and which does not skimp on gory details. Although the animation is light and fun, lots of blood is spilled while playing and there is no end to the amount of guts and carnage displayed on screen.

The reason these mice are evil is not fully explained or developed, but they are your target and your job is to kill them as quickly as possible. There are several rows of dirt holes that the mice emerge from dressed in red or green and special weapons you must use against the respective colors of the mice. In the midst of this confusion are plenty of decoys like average looking rats without any costumes and black fire crackers lit on fire. If you accidentally hit a decoy your health is jeopardized by the mice you didn’t kill and you lose points. This can be remedied of course by the health bottles that pop up every once a while which boost your “heart” and the coins you collect which can buy you more health between games. 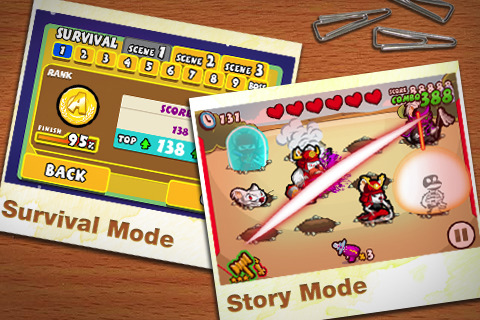 I was particularly impressed by how many levels this game comes with–a staggering 120. Not only does that provide plenty of time to distract yourself from more pressing responsibilities, but you have a choice in what mode you want to play in. There is “Survival” mode or “Story” mode, each with different underlining missions. If you play in Survival mode you are bombarded by way more mice, each hole replenishing itself with a mouse immediately after you kill one. It is harder to keep up with these levels, even though you can allegedly kill up to five mice at a time. Either my fingers don’t work that fast or my heart can’t keep up with that kind of pressure because I vastly preferred the “Story” mode, a slower paced version of the game that relies more on coordination than speed.

In the Story mode you have to pay attention to things like not hitting a green mouse with a red weapon and not hitting the decoys accidentally. I’m better at eye-hand coordination than rapid finger movement, so the Story mode was more enjoyable for me. This game is also fun because it has the aspect of being ongoing. You collect and accumulate coins, maintain your health, and kill the mice as efficiently as possible. Your job is assessed at the end of each game, giving you a percentage of how well you did before you move on to the next level.

For the most part I got a 90% or higher, boosting my morale and fooling me into thinking I rocked at mice extermination. Then I realized I was still playing on easy, and that I can’t really boast until I try mastering this game on hard. While I hate seeing so many mice die in a split second, I really like bringing them to their doom and for 99 cents it is well worth the challenge.

4 Comments to “Army of Mice”