This is a dungeon timed-puzzle solver. You walk around a dungeon collecting giant shiny scarabs, artifacts, and keys within a somewhat lenient time limit to get out of the dungeon in time. This is an app from Fun Guy Media Pty Ltd and is for the iPhone, iPod touch, and iPad and costs $1.99 (8/6/2010).

As you start the game, you are introduced to Blake. This guy’s father leaves him a letter about how he failed to return artifacts to their proper places and they are all cursed. Blake promptly takes the ‘artefacts’ and sets off to return them to their Egyptian tombs, dungeons, and ruins.

The game tells the story in super short, usually 2-3 images, still frame narrations. The art for the drawings range from amateur Photoshopping to taking a picture and running the Poster Edge filter over it. I can’t say that they didn’t try to the best of their ability to draw some these images… I’m just saying that maybe it would have been better to contract it out.

The first feature of this game is listed as “Gorgeous 3D graphics”. The gameplay’s 3D effects are alright. A lot of the time, they are a tan color with little features. The floor tiles are pretty, but most of it is bare basic. This is more of the lack of experience feel and the 3D just doesn’t hold up as anything special… unlike what the blurb in the iTunes description says. It’s not bad, don’t get me wrong… it’s just not “Gorgeous 3D graphics.”

The sound effects are ok, with the soft ambient noises that seem to imply that at any moment, some mummy will pop out and startle me. They set a mood well and do wonders to add suspense to the game. Everything else is nothing worth noting since it’s just ‘you got the key’ sound effects and ‘you got the scarab’ musical que.

The golden heart of this game comes in gameplay. The pushing and destroying of certain boxes, the gathering of items, and the cleaver order of it all is what makes this game worth playing past the first level. There are times where the clock is ticking down, you’ve finally realized how to solve this riddle and you have only a few minutes to collect all the bugs, move the boxes, use the key, and place the artifact, and all of this while trying extra hard to not mess up. It’s actually fun.

I would have wished for a joystick to control the character instead of the point-and-click style of movement, especially since it gets pretty annoying when you accidentally touch a wall and can’t move. I would even say that this wall-interference is what makes those last second runs so dangerous and panicky. 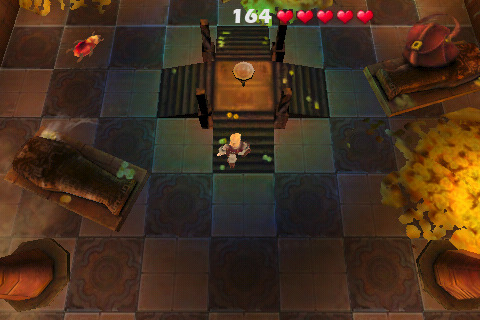 All and all, this is a good game with good gameplay. The graphics weren’t great though. Maybe you shouldn’t include this as a game feature guys… in fact, only 1 of 4 of the ‘game features’ was actually a game feature: ‘Solve the puzzles by returning artefacts you find.’ Movement, camera controls, and graphics are not features of a game… they are the core basics that most games should have and that most games require to properly function. I’d be like World of Warcraft (as an example) having a caption on the back of the game box proclaiming that “You can check the map with the M key” and “Just click on the floor to walk or use the WASD keys!” Your game features should sell the game as exciting and a must play… not explaining what the tutorial is supposed to tell you. Instead, maybe you could write about how the setting is based on Egyptian tombs and that the puzzles have variety and have a time limit that gets shorter as you fail to add to the intensity.

Overall, Entombed is an above-average iPhone game with nice puzzles and alright graphics. The storytelling could improve, the controls could use an alternative, and the graphics could use some polish, but outside of all those faults, sometimes the gameplay really does make the game. I like it a lot, it just needs more polish.