Stardunk is a basketball style shoot-to-score game where you try to score as many points as possible within a time limit, by bouncing a ball into a hoop, then you can sumbit the score into Plus+. This game app is available for $0.99 (8/10/2010) by Godzilab Inc and is compatible with the iPhone, iPod touch, and iPad. Please note that because this is a Plus+ game, it requires that you open an account with them just to start the game. It is a simple set up, so it’s not too big a deal, but it could irritate some users.

First of all, I am on a lucky streak of really great and fun games. This is probably one of the most simple of games. You drag on the screen and the ball will show you its trajectory. You release and the ball will fly off. Your goal is to hit the basket and score points. You also have a back wall of 4 panels. Each time you hit a panel, it will light up. If you light the whole set, you get a random power up which will help you score more points or make it easier to score more points. 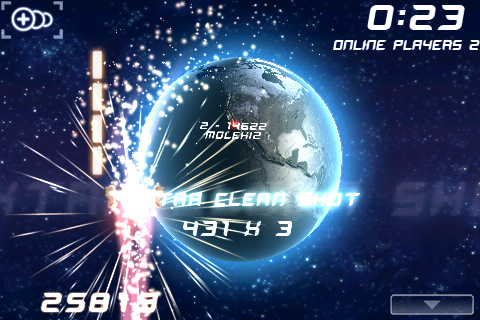 The graphics are bombastic. What I mean by that is that almost everything you do is a particle explosion of bright explosions and colorful flares. It’s really a spectacle when you toss the last ball and it zooms in and slows down the speed so you can watch as your last shot explodes with awesomeness and win.

The giant glowing earth is a really appropriate background image… for some reason… I still can’t say, but it’s really a nice image to look at when you’re playing basketball in space. The best part of the game is the customizable unlockables. You basically unlock balls that replace your standard one. Each ball has a different ability or trait such as bounce, speed, hardness, power-up enhancements, or balls that grant you extra points for clean shots. My favorite, and one of the toughest to get, is the Infinite ball, which allows you to jump the ball after the first toss.

The music is groovy and doesn’t have that repetitiveness that so many other apps have and the sound effects are well done. If I had any suggestions for this game, it would be different planets to visit or some kind of color changing so that the big blue Earth isn’t the only planet to stare at during game play. Other than that, this is a great game for time wasting and a great game for just having some fun. Online Multiplayer is best, though you can play offline without the ability to unlock new balls or submit a high score.