Play enough puzzle games and you’re bound to run into a variation of Mastermind after awhile. Even if you didn’t know it was called Mastermind at the time, I’m guessing you’ve played it. It was one of the first code-breaking games on the market, and you play by trying to guess at a series of colored dots.

In Mastermind, you want to identify both the order and color of a line of dots within a certain number of guesses You get feedback from each guess in the form of different white and black dots. Black means you have a colored dot in the right place. White means you have the right color somewhere, but it’s not in the right place. If you don’t get any white or black dots, then you don’t have any of the right colors out. Through a careful and systematic combination of logical deduction and trial and error, you should be able to crack the code. 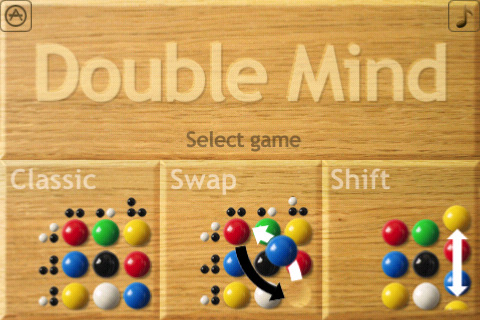 Double Mind takes the basic Mastermind concept and squares it. Instead of just a single line of colored dots to guess, you have an entire grid and three different ways to play. The first, Classic, works about the same as regular Mastermind, only with the grid to decode instead of just a line. Swap mode starts you off with the correct colors on the grid, but you must swap them around the board to put them in their correct positions. Shift mode is like combining Mastermind with a Rubik’s Cube, and you must shift the colors around in a line to arrange them to match a shown solution. Swap and Shift are also slightly competitive as you are racing against a computer opponent, but it doesn’t actually affect gameplay in any way. 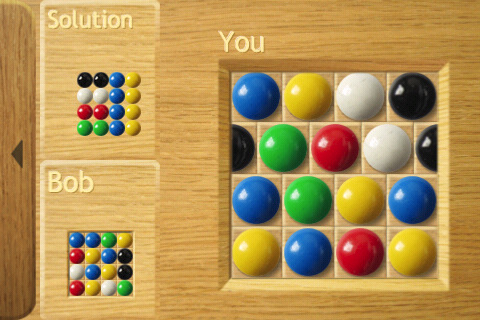 It’s an interesting twist on the classic Mastermind gameplay, but it’s not without problems. If you like Mastermind, then the addition of a grid during the Classic gameplay may hold a layer of challenging appeal, but Swap mode is fairly trivial to play, and Shift doesn’t even really feel related to the other games whatsoever. The tutorials do a good job of explaining how the variations work, but the added gimmick of racing the computer-generated “Mr. Kobayashi” to find the answer felt rather silly, especially when these are not designed to be competitive games. A simple countdown would have served the exact same purpose without confusing the issue. In fact, preserving the ability to compare best times would have made a lot more sense, so I am hoping Mr. Kobayashi will disappear from later versions of this game and be replaced by a clock.

It’s not really a terribly dynamic game, but I did appreciate the clean and easy to use interface, and it certainly looks and handles better than most other Mastermind clones out there. It doesn’t offer much, but if you’re looking for a very classic and simple puzzle game, Double Mind is a solid offering.