Hacky Sack got inexplicably popular a few years ago. I don’t know why. But what happens if you somehow translate the football (soccer) bouncing into an iDevice? Tappysack comes to us from Ian MacLarty on the iPhone, iPod touch, and iPad for $0.99.

Like those physics Flash games, here, you tap a ball to make it bounce. While it drifts back down, try to hit it again and keep it in the air while maintaining its direction, speed, and bounce so you don’t end up launching it a thousand miles per hour off screen and have it warp to the other side and cause you to drop it. 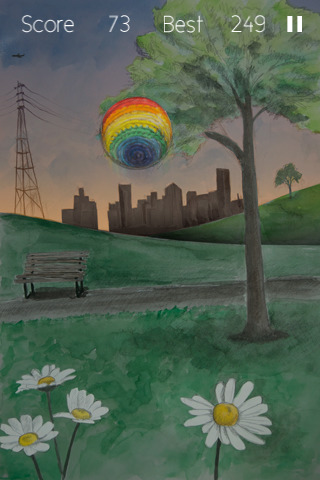 The main idea of the game is to keep the ball bouncing in order to reveal parts of the background. A soft, soothing background music track plays as you reveal more and if you drop the ball, the screen fades back into pencil sketches and the music stops… pretty much telling you that you suck because you killed art and music at the same time for your lack of Hacky-skills.

The animation and colors really do make the game look incredibly peaceful and calming. At higher bounce numbers, you reveal animated elements of the background. I fail often though and this game gets more difficult since the ball has the tendency to move into the sides and make it difficult to bounce without sending it flying. I really wished for some type of checkpoint system where you hit a certain part of the stage and it saves there. That way, you can build on that instead of start over. I once got close to 100 bounces and lost it because the ball was split between two sides of the screen and I tapped the outer edge of my phone instead of the hit box of the ball. So disappointingly sad after such a long time of pure concentration. 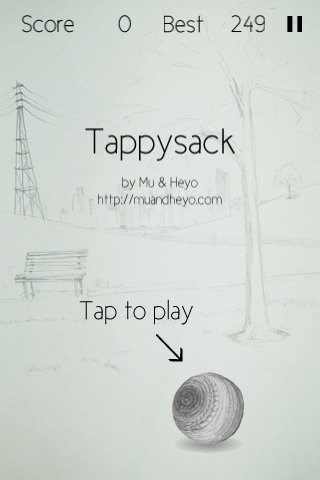 This was a great way to spend some time. Tappysack an easy distraction app with beautiful music, very peaceful backgrounds, and is incredibly artsy. This could easily be an art appreciation app and I wouldn’t mind more backgrounds, save points, and maybe different ball skins.