Nyarlu Labs’ Forget-Me-Not is a simple, beautiful, immensely fun iPhone and iPad game with an old-school arcade feel. The gameplay is a cross between Pac-Man and Rogue, and although these influences are apparent from the first level, Forget-Me-Not has a personality all its own.

I grew up with Pac-Man, and for years I considered it to be the perfect game. There was nothing to be added or changed, no possible way to improve the experience. It never occurred to me that it might be interesting to add, say, randomly-generated mazes, or to give everyone guns. Fortunately, someone thought of it, and Forget-Me-Not is the result. 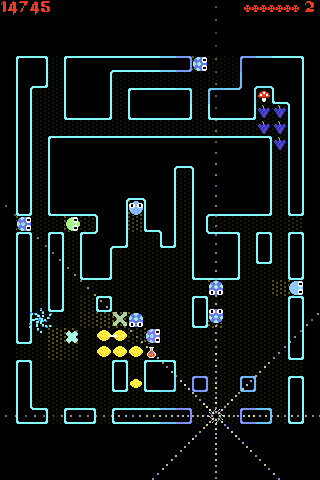 Each level in Forget-Me-Not is a randomly-generated maze filled with little flowers, and you must collect all of the flowers to access the next level. There’s also a key you’ll need to grab, which has the added benefit of shielding you from shots – including your own, which can and will hurt you. Your little square guy is always moving and always shooting, and you simply control its direction by swiping.

Enemies are spawned randomly on the floor. There’s a wide variety of them, mostly colorful little critters with cartoon eyes, each with various abilities. They’ll grab your flowers, steal your key, and shoot at you. Some of them leave trails of goo, multiply when shot, or do other strange things. Fortunately, most of them move around at random instead of chasing you, and they’re perfectly happy to attack each other, leaving you to gather fruit in their wake. If the bug-eyed critters aren’t enough, there are ghosts, centipedes, bombs, and wizards to contend with. 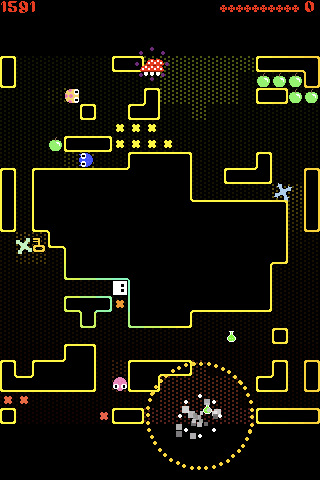 There are other interesting additions, too: health and power potions, the ability to earn extra lives through collecting fruit, point values that dramatically increase with the number of flowers you collect in a row. One of the more novel features is “grinding”: if you scrape along the walls as you move, you eventually gain enough power to plow through any enemy. Power up too much, however, and you explode.

True to its roots, the game’s graphics and sound effects are reminiscent of the early 8-bit era, but more polished. The flowers and maze walls subtly shift colors. The overall effect is mesmerizing but never distracting, and it’s as fun to watch as it is to play. And because the mazes are different each time, it’s hard to get bored.

Although the game works well on the iPhone, it’s easier on the eyes with the iPad’s larger screen. If you try the two-player mode, definitely use the iPad; the game adapts well to two players, but you’ll need the added space.

Is Forget-Me-Not better than Pac-Man? I’m not sure I’d go that far. But it’s one of the best iPhone games I’ve seen, and I enthusiastically recommend it.