RobotNGun by Crazy Carpenter is an app for the iPhone and iPod Touch. Moving around the battlefield as a robot with booster rockets and an arsenal of high tech weapons while fighting off an alien invasion is an interesting yet overused concept. You are the planet’s only hope in defeating the invaders who wish to harvest the planet’s resources. The story might be overdone but the gameplay is to destroy every enemy and move on to the next stage. Every tenth stage is the boss stage where you have to fight a bigger enemy while shooting at smaller ones.

Before going into battle you can use TP to upgrade three stats for your robot or buy and upgrade weapons. TP is earned by defeating enemies and finishing a stage. The three stats you can upgrade are a cooling system for your weapons, armor system, and power system for your booster rockets. A fourth thing to spend your points on is repairing which restores twenty percent of your health. If you are below twenty percent health, I suggest killing some enemies until you die so when you go back to the upgrade screen you will have twenty percent health and can buy four repairings to get to full health. Repairs get more expensive as you upgrade your armor. There are nine guns to purchase and a gun can be upgraded ten times. You move the robot around the battlefield with your left thumb while holding down with your right thumb to fire. Weapons overheat the longer you use them so you will switch between weapons to allow the others to recover. Enemies will swarm the field, this is where you will use your boosters to move faster and try to dodge their attacks. Try to keep track of the yellow booster meter since it will overheat as well. When the battle gets heated, it might be a bit frustrating to evade enemies and bosses. There is a leaderboard that keeps tracks of scores when playing challenges. There is lag when too many enemies are onscreen. 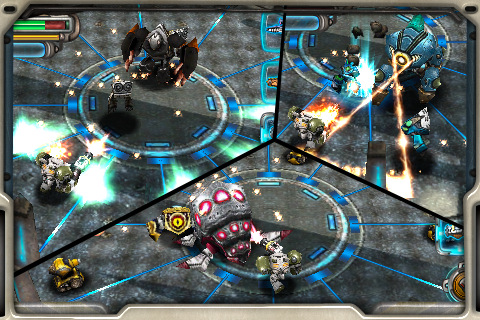 The robot and the enemy models look like something on the N64 while the background is a bit nicer looking. Both of them can be clunky, pixelated and repetitive. The graphics of RobotNGun are not the best but they are fine for those who don’t care about graphics.

RobotNGun’s music and sound effects might be boring for many people. I think the audio is fine but nothing out of the ordinary. They sound like what they are suppose to sound like. The audio can be adjusted by a sliding bar. There is no iPod music support.

RobotNGun is priced at $2.99. You can also make an in game purchase for 20,000 TP or a power system controller for $0.99 which will automatically shut off your boosters when they overheat. There is a challenge mode which features five different missions but they need to be unlocked. This app is fun for awhile but will become repetitive sooner or later.