AlienTankz by Lighteyes Studio is an app for the iPhone, iPod Touch, and the iPad. This game is a horizontal scrolling shooter. Much like its vertical counterpart, AlienTankz has the screen moving left to right while you drive your tank trying to take down as many enemies as you can. It reminds me of Metal Slug in some ways. You pick up whatever powerups that drop and try to beat the boss of that stage. The differences between AlienTankz and Metal Slug are improving the parameters of your tank and the graphics.

Piloting a tank can be difficult but in AlienTankz it is pretty easy. On the map, you select a stage that is unlocked then you press the arrow to go to that mission. Before you fight, you can upgrade one of six tank attributes such as laser beams, super weapon, and shield. 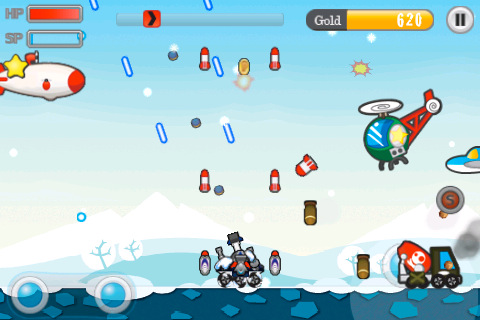 Each attribute can be upgraded a maximum of three times and it costs money to do so. Money is collected by killing enemies. You slide your finger (preferably the thumb) back and forth between two blue circles to move the tank. The weapons will fire automatically in the direction you move your right thumb to. You can tap the small red circle with an S in it to use your super weapon which will annihilate all enemies and enemy fire on screen. This helps in dealing with a swarm of enemy bullets and lasers or a ton of enemies. The controls are simple but may take some time to get use to. In the options, you can use left handed controls if you need to. There is no online feature of any sort for AlienTankz.

The graphics of AlienTankz remind me of something from a childrens’ book since they are very cartoony. There is no blood but there are explosions. The graphics are slighty pixelated at times and has a slight slowdown if there are too many things on screen. AlienTankz has simple designs but their quality is above average. 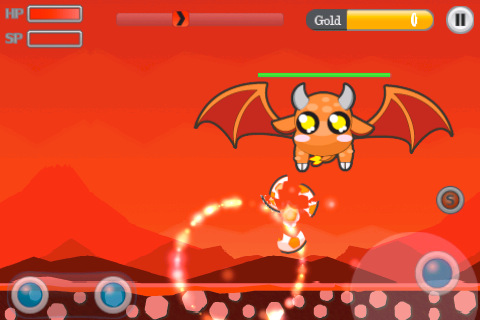 The music for AlienTankz is repetitive. The sound effects are nothing out of the ordinary. You can turn them off if you want to but I hope they include a way to use your own music. The sounds do not enhance the atmosphere of AlienTankz but they do fit it.

The price for AlienTankz is $0.99 on iTunes. You can pick this game up and play it anytime you want. You can also replay a mission to try to get three stars or beat the enemies to get one hundred percent accuracy. The bosses for AlienTankz are tough. You have to upgrade your tank in order to deal with them. As a suggestion, upgrade your tank when you can because you will need it. Also, try to pick up the powerups if you can. Overall, AlienTankz is a simple, horizontal-scrolling shooter that I would recommend for a child.