Overkill by Craneballs Studios is a free app for the iPhone, iPod Touch, and the iPad. This app reminds me of the days when I would go to an arcade to play video games. Overkill is somewhat like Area 51, CarnEvil or Point Blank since you can shoot and reload but the difference is you can change a weapon with a different one you’ve bought. Overkill is similar to those games but does it in a different way.

The controls for Overkill are unique to iDevices but take some time to get use to. You use your left thumb to aim and the right to shoot. To reload just shake the device and switch weapons by sliding down the screen with two fingers. The enemies don’t move most of the time and will show how much time is left for them to reload their weapons before they start firing. Enemy fire cannot be dodged and will not miss. You have to pick and choose which hit to take unless you are good at shooting enemies down in quick succession. If you can kills enemies quickly and efficiently, you will get boosts to your firing rate, accuracy, armor, and more. 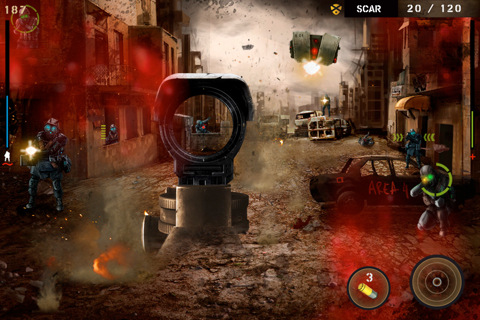 With each wave, the enemies get stronger and the strongest on the hell wave which is the twenty-first wave on a level. You can regenerate health on your own after some time has passed or shoot health boxes to recover some but you have to be quick or it will disappear. Try to get head shots and be careful when to reload your weapons. Whether the wave was won or not, you will be given money for every enemy you have killed. Overkill Medals or OM are earned by getting certain amounts of points. Points determine your rank such as Captain and when a certain amount is obtained you will also get a new level. Money and medals are used to buy weapons, ammo, and equipment to augment your weapons. I highly suggest using money to buy items and save the medals for items that can only be purchased by the medals. Medals can also be gained by downloading apps suggested by Craneballs or by buying them. Overkill has Game Center support.

The graphics of Overkill are small but are crisp and clean. There is noticeable lag when too many things are happening onscreen. The levels look like places where modern battles are fought. The layout is informative and not cluttered. When you get hit, blood will splatter onscreen. You can turn the blood on or off. Armored humanoids (don’t know if the enemies are human or not) will die or if they are mechanical they will explode. On the loading screen, it will show a random tip, while completing a wave will give you a random fact about a weapon. Overkill’s graphics are small so it may be difficult to shoot down enemies but is polished and informative. 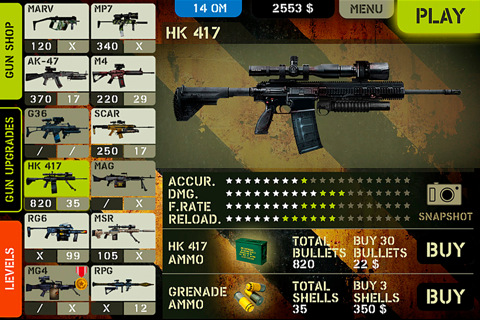 The sound effects sound like a modern warfare show. The music seems repetitive and boring to me. You can turn the music and sound effects on or off. There is no iPod music support. Bullets speed across the screen while rockets blow anything in its path to pieces. Overall, Overkill’s music is unimpressive to me but its sound effects fit the atmosphere very well.

This app is available for free in the iTunes App Store. Overkill is similar to old school arcade lightgun games but on an iDevice. There are a few problems since the update such as random crashing and very noticeable lag. One ongoing problem for me is the responsiveness of the controls but it doesn’t stop me from enjoying the game. I hope Craneballs Studios will fix all of these problems. I recommend this game for those who have fond memories of arcade lightgun games or those who like to destroy wave after wave of enemies with realistic weapons.