Gun Bros by Glu is an app for the iPhone, iPod Touch, and the iPad where you control a big muscular military man. As Percy or Francis Gun, you will shoot to eliminate wave after wave of T.O.O.L. forces. There are eleven planets to choose from, each with ten revolutions and fifty waves of enemies. You start with one planet and unlock more as you progress. Gun Bros is a real-time shooter with some role playing elements such as leveling your character and weaponry.

Gun Bros is a dual stick shooter. Use your thumbs to move and shoot in 360 degree fashion. You can bring two types of weapons with you and press the button on the right to change weapons. Each weapon has three levels of mastery. When a weapon is mastered, it gives you ten, thirty, and eighty percent of your current experience points as a reward. When you level up, you get more health and are able to equip better weapons and armors. The red button to the left is used to select purchased smartillery. Smartillery is used to change the tide of battle such as healing yourself, increasing your attack, speed, defense, and doing greater damage to enemy units. 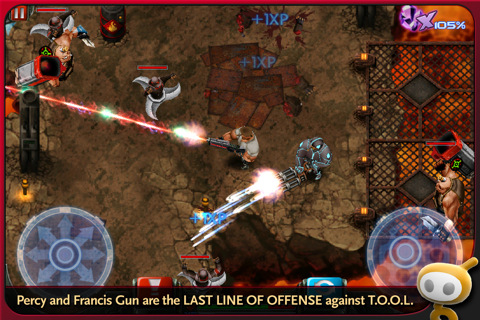 Each planet has a special feature such as exploding barrels, slowing down time, and turrets in helping you kill enemies. When you kill enemies you get experience points and xplodium used in the refinery to get coins. Finishing a wave without taking damage increases the rate of xplodium you get by five percent. There is also warbucks which can be gained for free by downloading other apps or purchasing them from the bank menu. Warbucks are used to buy the strongest weapons, armors, and smartillery. Gun Bros allows you to download your friends’ or other people’s bros to help you in battle via Facebook or Game Center. There is no multiplayer mode in this game so the computer controls the other “bro”.

The graphics are psuedo 3D. Visuals are more detailed while the gameplay is on a 2D plane with an eagle’s eye view. Gun Bros’ graphics are detailed though repetitive. You see cracks on the ground and lava flowing on the first planet. The visuals only change when you are on another planet and can be kind of small. When you equip your character with armor and guns, his appearance is reflected onscreen. Your enemies have different ways of attacking you but sooner or later you’ll see enough of one or the other. When you kill an enemy, it explodes into a shower of blood and guts. There are some suggestive images when the game is loading. 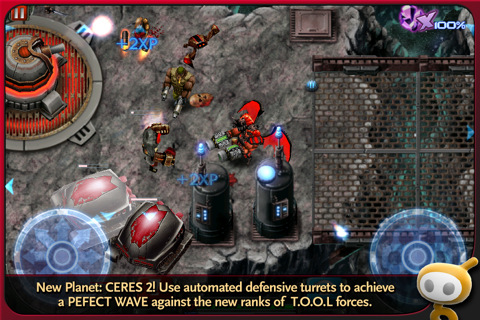 Gun Bros is available free in the App Store. This is not a pick up and play type of game since need to kill all the enemies in a wave to get experience and xplodium which can last quite some time. You can kill one enemy and then die to get experience and money but if you quit or didn’t kill anything you will get nothing. There are fifty waves per revolution so it will take awhile unless you have high stats and great weapons and armor. You can replay a wave to get more xplodium for money and exp for leveling up and weapon mastery. Meanwhile, you can also replay a stage to try to get a perfect wave.

With the recent update, the game doesn’t crash as much although there is an increased lag. Overall, the updated version is better than not being able to play the game at all.

It feels like in order to get the best items in Gun Bros you have to spend real cash via in-app purchases rather than them just being a faster route. In order to get the best equipment, you have to get warbucks either by downloading an app (sometimes gets in the way of selecting things) which give one to three war bucks or purchasing them from the store. The “best” offer is 710 warbucks for $99.99 which is quite pricey. I don’t know if that is enough to get everything but it is something to consider. Overall, Gun Bros is a fun game despite some repetitiveness and expensive in-app purchases.