Wingmen: World War is a unique real-time strategy airplane dogfight game released by Lapu Games on App Store for the iPhone and iPod touch selling at $1.99. Bring out your airforce and destroy aliens while maintaining resources and managing your unit upgrades.

I must admit, I never thought of aerial dog fights and RTS style gameplay in a single package. Turns and loops, dives and barrel rolls. You get to watch as your planes fight it out against alien ships and your main job is commanding them where to go, what powerups to activate, and when to launch an assault. You also produce new planes by gathering money, which increases over time and with each enemy destroyed. 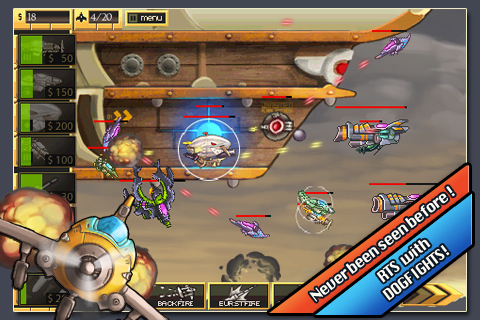 You have a ton of level ups, purchasable planes and abilities, special attacks, and enemies to battle against. You play against them by tapping the make new unit buttons, sliding your finger across the field to pan the camera, ‘zooming’ with your fingers to select your units, and tapping after selecting units to send them to that area. Some enemy attacks require a quick retreat while others force you to maneuver around them. Everything is explained nicely in the story introduction but if you want a reminder, there doesn’t seem to be any way to access the tutorial again without restarting your campaign.

Art for the planes and backgrounds are quite good. They really remind me of Metal Slug or a classic side scrolling shooter. The user interface has lovely yellow accents and a steam-punk style. Each airplane has their own unique sprites in-game and they look pretty good. 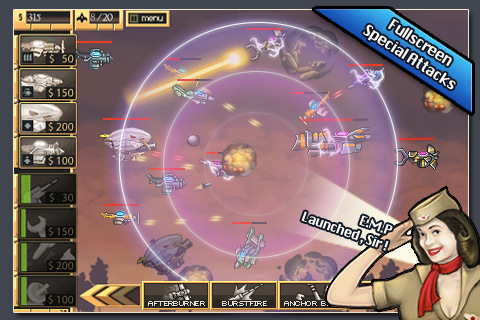 I do have some issues with Wingmen: World War however. In mid battle, it’s near impossible to tell which unit is yours at first glance. Instead of having all your planes colored the same, sometimes your units will share similar shades as the enemy. Unless you select them, you’d never be able to tell the difference visually. Another issue comes in selecting units. I would have really loved a “Select All” button or “Select All On/Off Screen” button to make the game more manageable. It’s really not fun to reselect the same units over and over again just because you created a new plane.

Another issue is that there isn’t any way to increase how many resources you collect like most RTS games. Usually, there is a unit that’s only purpose is to generate more gold, ore, crystals, or in this case, money. Here, this single unit would have balanced the insanely difficult levels out with more strategies like resource hording. Ways to speed up the cool down time for making new units would really help as well since enemies hit hard and you’ll always want to create new units to match how insanely powerful your opponents can hit.

Overall, the difficulty of Wingmen: World War from unit management and resource shortages can put a hamper on your mood but the amount of content available, the great art, the easy to understand gameplay can easily offset this. I would also love to have easier ways to gain experience points to level my units since the missions get significantly more difficult by level 3-4. In the end though, I give full credits to this game for its unique take on the RTS genre. Do a barrel roll, indeed.

Here is a video demo of the Wingmen: World War app on the iPhone