Cado is unique new puzzle game for the iPhone from ClearCut games. What masquerades as a simple puzzler with rudimentary graphics is in reality a challenging physics-based thinking game that takes precise timing and planning to master.

The object of Cado is simple — guide the ball to the destination portal simply by rotating the world in which the ball exists. As you turn the world using left and right arrows, the ball will react accordingly, rolling to one side, or another, and falling to different parts of the level (or off the map completely) when it succumbs to the change in gravity. Along the way you must avoid deadly spikes, and, if you’re ambitious, you can collect a star on the map to fully complete the level. The first few levels seem easy enough but quickly the challenge of Cado quickly ramps up (which is good because there are only 40 levels, though the developers have promised to release 20 more free levels soon). While the objective is repetitive after awhile, the levels are uniquely designed and no two levels really feel alike. 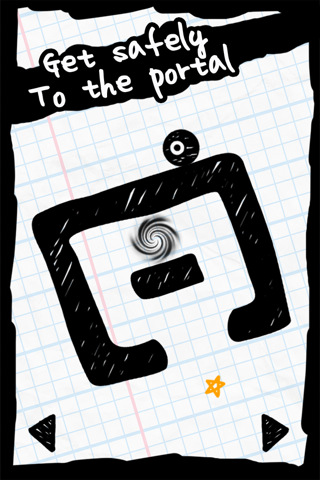 What really stands out about Cado is the simplistic artwork present throughout. Cado has no frills whatsoever graphically, but the minimalistic nature actually works to its advantage. If you’ve played Doodle Bowling, Cado will look very similar to you. With a background of notebook style graph paper and levels “drawn” almost entirely in black pen (complete with scribbled shading), Cado certainly doesn’t push the boundaries of what your iPhone can handle graphically, but for some of you (myself included), the simplicity is actually very refreshing. Cado is an example of letting the gameplay speak for itself, and it really does.

When a game relies fully on gameplay for its success, it better have great controls and Cado (mostly) delivers. The left and right arrows are very responsive and the world always turns on command. However, I would have loved for this game to have added tilt controls, I think if any non-driving game deserves to be tilted, Cado is the perfect candidate. With that being said, it’s not as though you’ll have any less fun playing the game, it just would be a fun addition. 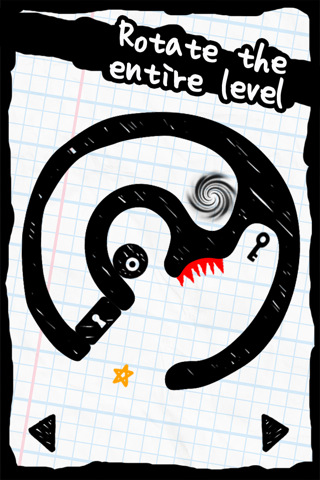 Cado is a simplistic, no frills, and really fun physics based puzzle game. If you’re looking for a puzzler with a unique approach to the genre, look no further than Cado. While the 40 levels currently available is a little skimpy, it will take some time for you perfect each one, and with 20 more on the way Cado is a bargain for just $0.99 in the App Store.