Punch Hero is a newly-released application for iPhone, iPod Touch and iPad. The title, which is published by Gamevil and developed by Cocosoft, is a boxing game. With a decent amount of depth, graphics that are at least acceptable and a few other enhancements, Punch Hero is an iPhone app that has already received positive feedback and looks like it might make a lasting impression. Let’s taker a closer look at this iOS app and see what it has to offer, compared to the thousands of other boxing apps for the iPhone.

As stated, Punch Hero is a boxing title. You’ll have an opportunity to create a customized boxer the first time you launch the application, and you can make further tweaks to him later on if you choose. The meat and potatoes of the title is its Arcade Mode feature. In this setting, you’ll box your way through a series of different challengers in search of boxing glory. There’s no story to it, but there’s also not one needed. It’s a boxing game, plain and simple. 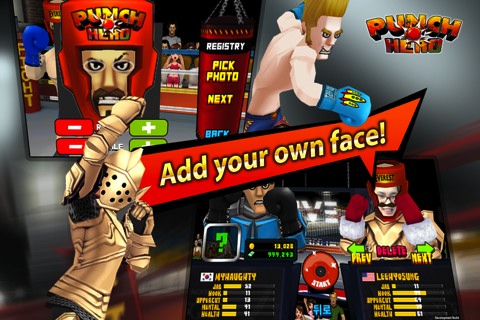 Controlling your boxer is fairly simple. You tap the left side of the screen to throw a left-handed punch and the right side to throw a right-handed punch. Swiping up on either side will deliver an uppercut with the appropriate hand, and swiping from one side to the other will have your boxer toss a hook at the opponent. Touching one finger concurrently on each side of the screen lets you block, and evade buttons are located in the lower right and left for dodging your opponent’s blows.

The mechanics are simple to grasp, and for the purpose of this review they were more than responsive. We reviewed this title on an iPhone 4 and experienced no lag, so most iOS owners should find that Punch Hero provides a comfortable gaming experience. 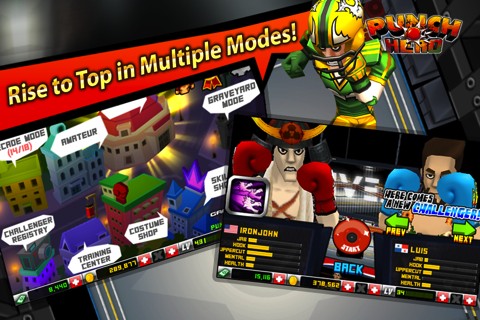 With that said, there are a couple of issues with the Punch Hero. The first, and most annoying, is the fixed camera angle. The camera is set relatively close to your boxer, making it hard sometimes to see your opponent’s hands. It happened more than once where our opponent got a punch in because we couldn’t see his hands. It’s also unfortunate that you can’t move your boxer around, although implementing mechanics for movement would take away from the overall simple action provided by the title.

Minor issues aside, Punch Hero’s fun to play and provides a lasting experience. Aside from Arcade Mode, a few other options are present. The Skill Shop and Costume Shop let you upgrade your boxer’s abilities and appearance, while the Training Center lets you get some practice in. Our favorite feature of Punch Hero, though, is the ability to load in a picture of yourself or friends to use as a boxer’s face. There’s something inherently amusing about being able to pull a buddy’s picture off of Facebook and beat him mercilessly.

Overall, Punch Hero is a solid game. It has its flaws, but we have to believe they’ll be ironed out as Gamevil receives feedback. It’s a free download that relies on in-app purchases, but the core of the title can be played for free. If you have an iOS device and like boxing, give it a shot.