KORG iMS-20 is an iPad app that functions as an analog synth studio. Between 1973-1983 Korg sold a true monster of an analogue synthesizer – the MS20. A beast of a machine, this mix of cables, keys and knobs was a stable of tracks from electronic luminaries such as the Aphex Twin, Orbital, Daft Punk and The Progidy. Sadly a quick look on eBay shows MS20s going for about $2000, which is more than I have lying around the house unfortunately.

I do however have an iPad and Korg have followed up their fun yet slightly flawed Electribe app with the Korg iMS20, bringing analogue synthesis to the touchscreen era. 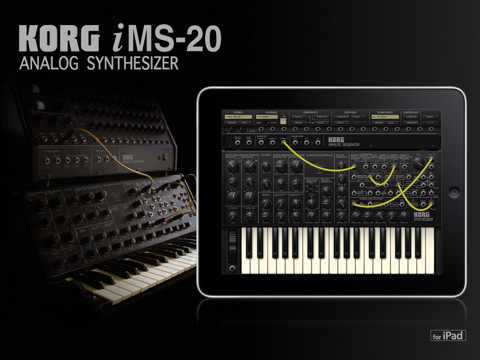 Firing the app up you are presented with an onscreen representation of the MS20. Now if you are of a certain age or bent then this should be all you desire – it looks pretty much the same as the real thing and you can pick up where you left off tweaking and twiddling to your heart’s content. Others trying out monophonic synthesis for the first time might not be so lucky as the learning curve is ridiculously steep.

It’s a climb worth making however as the on-board demo songs reveal the raw power of the app. There is more than enough power packed into the iMS20 to produce whole songs – and with enough patience and talent you can bend beats, bass lines and beeps to your will to produce a whole track. 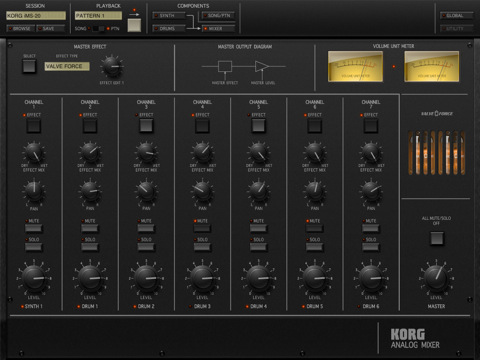 The drum editor is a classic step sequencer where you just plug in your beats where you want them. If you downloaded the ReBirth app then you should be familiar with how this works (and to be honest this layout is a lot easier as you can see how your kick, snare and hi-hat interact with each other without the guess work … or musicality). You can tweak each drum sound back on the keyboard interface, which is good fun and a really useful way to learn the basics of analogue synthesis. Taking advantage of the iPad’s touchscreen, you can also bang out a beat using the 6 touchscreen pads lined up at the bottom of the screen. In an ideal world these would be in a conventional grid layout as it’s a little bit … fiddly in the current layout. But that’s a minor gripe.

My favourite function by far is the built in Kaoss pad (well two pads actually) where you can assign functions and then just go crazy with your fingers tweaking sounds on the fly. So you could easily set up a simply bass and drum pattern and then improvise live using the Kaoss pads to alter volume, pan, gate or pitch settings. When you play with pitch you can even change the scale so you can get all Mixolydian over “Nothin’ but a G Thing” (if you get that joke then I can only apologise).

The app is slightly pricy at $15.99 (£19.99) but for all the functionality you get – and bearing in mind an original off eBay would cost you far more, you’d be insane to complain. 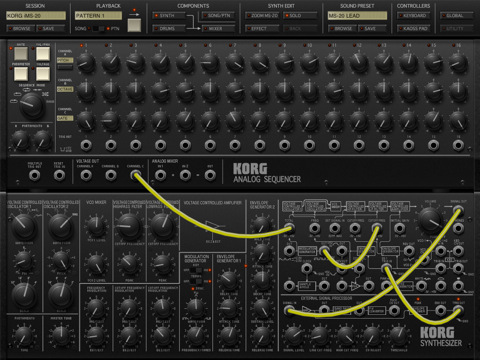 Song/Pattern composer:
– Compose a song or select a pattern, built-in mixer
– 16 patterns and 256 bars per a song
– Tempo setting (20-300 BPM) and Swing function