MailShot is a nifty new app that allows you to create groups of contacts in your phone, and contact them straight from your regular apps on the fly! With the addition of this application to the iPad , iPod Touch, and iPhone App store, you won’t have to go through the hassle of manually selecting contacts as email recipients. Simply tapping your group from your Contacts list will add them all immediately to your recipients. This free app is probably the best workaround for the current lack of email address groups on the iPhone.

When launching MailShot for the first time, you’ll be greeted with a tutorial that will walk you through the MailShot app . However, for most people, a tutorial is really not needed. MailShot is self-explanatory, and will have you setting up your groups in no time. 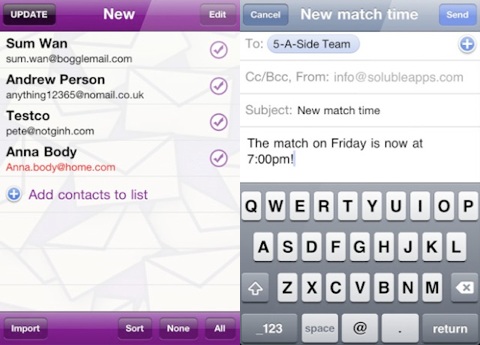 After launching the application , you’ll create your first group and give it a name. You can name it something such as “Friends” or “Colleagues.” Make sure it is something descriptive of everyone that will be placed into the group. Next, you’ll import your contacts into the group by “adding a contact” from the top of the screen. Once your contacts have all been loaded into the group, you can press the button that reads, “UPDATE” in the top left of the screen so that the group in your Contacts list is updated with all of the current contacts. With this simple process, MailShot makes it a cinch to contact various groups of people within your phone.

After creating your group, you’ll see it in your list of Contacts. From this point on, you’ll be able to select it from within all of your current apps for contacting the entire group easily and quickly. MailShot is certainly simple, but it is majorly effective for those who constantly find themselves manually and tediously selecting recipients for their messages. Most of all, MailShot is useful for email various groups of people on the fly. Need to relay a message to your co-workers that would be irrelevant to your family or friends? By tapping the name of your group once from your Contacts list, everyone in the group will be included for receiving your message.

MailShot has a paid twin which is called MailShot Pro ($3.99), but in this case, it is really not worth it to spend money on the pro version. This is because the free version supplies the majority of the functionality that the paid version does.

Overall, MailShot is a fantastic solution for anyone who finds themselves scratching their head over quickly emailing a certain group of people. You no longer have to manually select your contacts from your Contacts list, as you can simply tap one group and be done with it all!