It’s a massive undertaking to bring an epic and critically-acclaimed PC game to the teensy-weensy screen of the iPhone, but darned if Gameloft doesn’t make a gold star effort with The Settlers. A thoughtfully designed standalone of the classic real time strategy series and under license from Ubisoft, The Settlers is a thoroughly immersive but approachable beast of a game.

Like most real time strategy games, the basic structure is fairly typical. Your goal is to build a thriving community. You start with a small group of people (either Roman, Viking, Mayan, and the ominously named Dark Tribe), and you direct them to collect resources, build new structures, and develop their military. 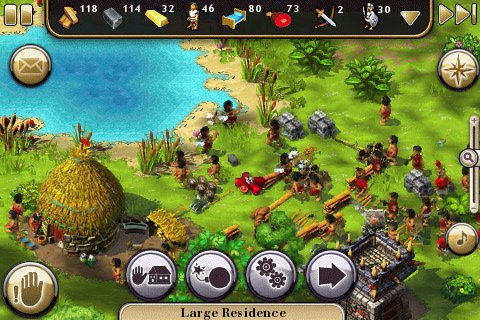 While you can certainly try to drive yourself crazy by micromanaging the action, The Settlers is primarily about big picture urban planning. The extremely comprehensive tutorial does a fantastic job of walking you through all the steps, and by the end of it, you’ll have a decent grasp of the basic mechanics of the game. This is very important, because the user interface is not particularly friendly, and while the graphics are impressive, the world is so huge, you may find yourself dragging around the screen desperately trying to remember which building or person is which.

Managing your buildings and little settlers is the real heart of the game, as there is a huge amount of variety to be found there. For most things, you will need particular buildings, tools, and specialists to get the job done, and this requires a fair amount of vigilance on the player’s part to make sure everything is in order and heading to the right place. This is nothing for fans of the series, but there is a reasonably intense learning curve for new players. That said, the iPhone version is a great introduction to the genre and the series, because the tutorial does an admirable job of explaining things while still keeping new players involved and entertained.

All things considered, while The Settlers isn’t particularly well-suited to the iPhone’s small format, it’s a stunning example of the genre all the same. Because the game is so ambitious with its vast scope, exploration, a well-loved aspect from the PC games, feels a little stilted and awkward on the iPhone, but the detailed graphics create a rich and engaging landscape. The soundtrack gets repetitive a little too quickly, but you do have the option of playing your own music.

Although the game isn’t perfect, you’d have a hard time finding a game as polished and deep. People tend to either love or hate RTS games, and even a well-loved series like The Settlers is no exception, but if you’re a fan of the genre, then this one will definitely provide hours and hours of entertainment.

This 3rd Party App is available at the Apple iTunes AppStore. Browse the full list of all AppStore apps filed under the AppStore category.
Download The Settlers at iTunes App Store
Price: $4.99
Developer: Website
AppSafari review of The Settlers was written by Tracy Yonemoto on July 13th, 2010 and categorized under App Store, Featured, Games, Strategy. Page viewed 4884 times, 1 so far today. Need help on using these apps? Please read the Help Page.