When is the last time you spent quality time at an arcade? If you are feeling nostalgic for that environment of unlimited combat-style fighting, spending hours on end trying to rise through levels while listening to shoddy sound effects mixed into fist pumping techno sans line-ups and bad lighting then Vamf x ½ is a good alternative. Vamf x ½ is a strange amalgamation of some well-known trends in the realm of combat games. It can be best described as a fusion of Street Fighter and arcade X-Men. According to the iTunes page for this app, the name itself signifies an offspring of a vampire mother and a wolf father. It is brought to us by Korean cartoonist Park Chansup and it is available for an iPhone, iPod Touch, and iPad. You can buy it for $0.99 or get the Lite version free. 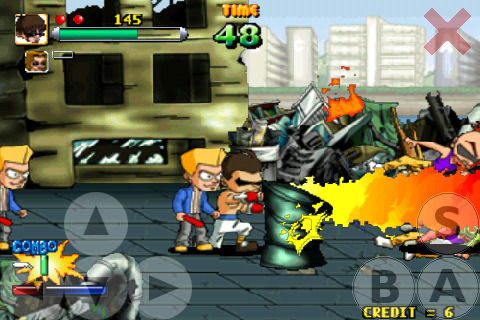 To start with, you cannot have any other apps open to access Vamf, it needs all of your memory space to be used. The first step is to pick your player from a list of four. There are multiplayer options. Once you pick your player, you begin a walk along a path that appears to be located on a junkyard dock with a hazy skyline in the background. You are not left alone long before you are challenged by the level’s assortment of bad guys. You are faced with different gangs including a wolf, bear, leopard, and human clan. You have to fight the whole gang before you reach the boss at the end of the level, who is significantly harder to kill than his henchmen, and who also taunts you with a hilarious set of poorly translated one-liners. Some gems include, “It’s war, my blood stirs after a long time,” and “You will cry tears for having much fear.” You do your fighting with a limited set of attack moves, such as punching and jump kicking.

In conclusion, this game offers very little outside of mind numbing punching and kicking and you do not accomplish anything different from level to level. You are confronted with the same layout each time and to say the least the game gets a bit monotonous after awhile.