The War of Eustrath review

The War of Eustrath is a turn-based strategy game involving awesome mechs, a Japanese anime art style, and badly translated dialog. It’s an anime in an app. This app is available for iPhone, iPod touch, and iPad, and is released by iQubi Inc. This game has some suggestive, crude, or violent content and is rated 9+. Trust me though, it’s nothing too bad. If you have ever watched ANY anime out there, then this is game is tame.

The game starts off right off the bat and throws you into a conflict against a group of soldiers controlled by a colossally stupid and panicky leader. The leader (unnamed and unimportant) decides that a civilian village is clearly a guerrilla base cleverly disguised as a normal village with only one fighter, even in the face of a big group of attackers coming across a river. The story is interesting and makes you hate the nameless, gonna-die-in-the-tutorial, Sargent guy despite the cartoonishly misguided behavior of the bad guys. 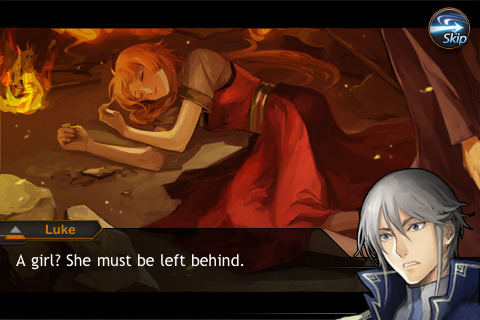 The tutorial system in this game is not interactive nor guiding… it’s just a couple of text boxes with lots and lots of dialog. If you have little experience with J-RPGs, turn-based strategy games, or if you have no idea what those two terms even mean, then this is going to be a very confusing start. Luckily, ‘some’ of the game’s main controls are easy to guess. Touch this, touch that, and attack. Simple.

Art is inconsistent in this game. The characters you play as or interact with are amazingly drawn. This is PSP or PS2 quality 2D art with strong definition and surprisingly distinguishing traits. The mechs are drawn with with almost Michael Bay-Transformers amount of details; the battle effects (explosions, slashes, etc..) are bright and well done. This is offset by the seemingly lazy and noisy map screen where you control your character. The characters are represented by giant heads and most of what you see is badly done, 3D-ish dirt and grass. I would have loved it if they drew some unique areas and maps with less photo-shopped copy/pasted environments to run around in. I also would have appreciated some unique character sprites instead of magically moving, giant helmets. 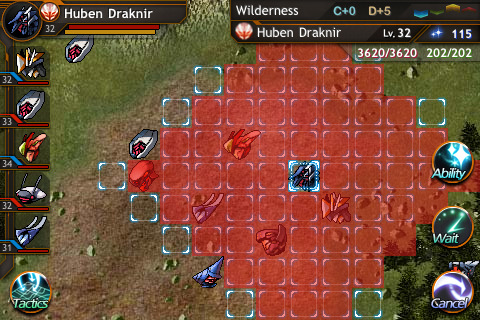 After reading what feels like an entire instructions manual, by about 5-6 battles into the game, I found I really loved the look and feel, but the story was a noticeable flaw. The main character, Luke, is a legend among the world apparently. His sidekick/comic relief is a really annoying but kindhearted female character named Tiana. She’s a pain. After rescuing her from the village in the beginning, her dialogs rarely relate to the plot at all and most of the time, it’s just filler. Character development can sometimes be better with action in games like these, such as taking a hit for someone, nearly dying after some really awesome action sequence, or SOMETHING that doesn’t involve inane conversations.

The translations are very suspect in this game, which could explain the uninvolved dialog, so I can’t really hate the dialog as much since I have to remember that writing dialog or scripts is difficult and can be a volatile beast to tame. The sounds are pretty good, but repetitively dull. The music repeats. Constantly. Over and over. The sounds in combat repeat. Constantly. Over and over. It’s real charm is listening to it once then turning the volume down.

This is a great game. I will be finishing it as time goes on, but the small minor flaws don’t detract from this entry into the turn-based strategy J-RPG game category. It’s one of the most pretty iPhone apps I’ve seen and most of it is because they don’t use 3D unless it’s to add a look to the game. Unfortunately, the 3D isn’t so hot.

This 3rd Party App is available at the Apple iTunes AppStore. Browse the full list of all AppStore apps filed under the AppStore category.
Download The War of Eustrath at iTunes App Store
Price: $5.99
Developer: Website
AppSafari review of The War of Eustrath was written by Joseph Ho on August 4th, 2010 and categorized under App Store, Games, RPG, Strategy, Universal. Page viewed 4862 times, 2 so far today. Need help on using these apps? Please read the Help Page.