In any case, this is the improbable premise of Sliding Heroes. You must send your brave pseudo-chess piece army to do battle with the forces of evil. Like any good fantasy game, you get your various character classes, the bog standard warrior, the speedy lancer, the frail mage handy for air attacks, and the holy cleric essential for fighting the undead, but useless for just about everything else. Sounds like your run-of-the-mill fantasy game, but there’s a catch. 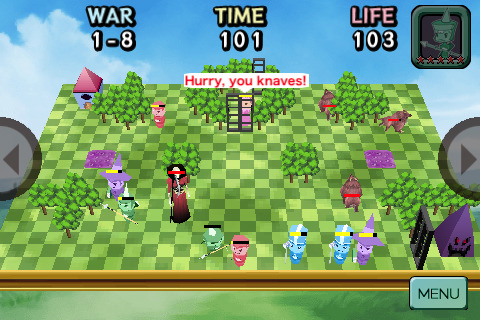 You see, the “Sliding” in the title refers to the gameplay mechanism. Instead of simply sending your troops into battle, you must utilize the iPhone’s accelerometer to slip and slide your minions toward the enemy. This is, as you might have guessed, rather difficult. Each character type moves differently, so it takes quite a bit of practice to slide them with any precision, which you’ll need if you’re going to get around dangerous obstacles or take on multiple enemies.

You do, however, get the hang of things eventually, but by that point you realize that the game doesn’t really have much else going for it. Every level is essentially the same, more or less, and mechanically tilting your iPhone around gets dull after awhile. Happily, the controls are smooth, once you’ve gotten comfortable with them, but as a strategy game, it just feels empty. There’s also a massive oversight in the lack of tilt calibration. You can adjust the tilt sensitivity if you like, but if you want to play this at any angle except straight down, you can forget it.

As you’d expect from a company like Square Enix, the graphics are pretty sharp, and the game looks like the weirdo love child of manga, Alice in Wonderland, and Playskool Weebles, but the overall character design is on the generic side, and bland is the last thing you want in a game that’s already hurting for content. 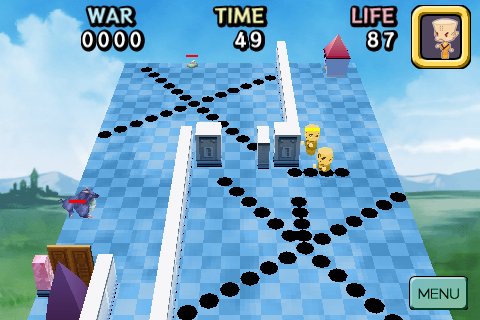 Bottom line, I expected much more from such a high profile company. The game isn’t particularly bad, just unremarkable, which is almost worse. If things were broken, then perhaps things would have been improved with subsequent updates, but in the case of Sliding Heroes, the overall concept itself is just fundamentally blah. The one thing it really has going for it is that it’s currently free with the big Square Enix sale going on, so if you’re going to get it, might as well be now.