I really liked the storytelling that this app gives. It’s told in a stylized moving 2D-in-3D style where it looks like paper-cut outs in a 3D room with a camera moving around. The story is actually told well with an interesting plot. The CG cutscene is done extremely well with neat little cinematic shots. 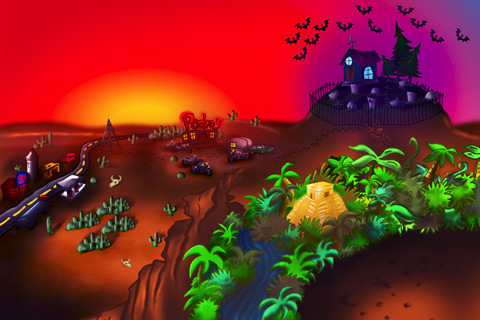 In game, you control your character with one joystick for movement and one joystick to fire your gun in any direction. This is the standard for top-down shooters. The enemies all come in a large variety with different styles of treatment. Some only take one hit, such as the bats, which made for some nice tutorial moments, but all other enemies come in and take way too many shots. At first, I thought I was missing, and then I realized that I was missing… and each time I hit, the enemies would keep coming. Yes, it does provide intensity, but it also drags out the circling around a bit too much.

As the first level progresses, you might find that it’s very hard to kill the shooting enemies without being shot from one that was hiding off screen. As I move around to shoot at one target, there are others waiting to sneak in a couple shots. It gets very difficult and the game doesn’t throw you any easy modes here. The health packs only appear late into the level and they really don’t help you when the shooter vampires end up cheap-shotting you as you try to evade the other monsters.

Pacing needs some work. The first level is way too difficult to shoot through since it lasts for a very long time with very little introduced besides a slow and inaccurate crossbow and a maybe two health powerups. Maybe if the waves gave you time to heal first before the next set came running in, or maybe if I could get more powerups faster to amp up the gameplay so it didn’t feel like it was dragging? 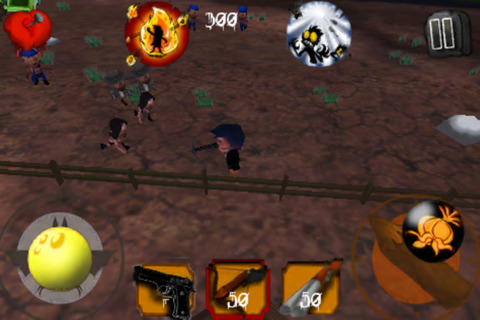 This is a great first version game. The title card looks nice, very violent, but the giant bright light that is shining prevents me from seeing the monsters well and covers the main character so I can’t see what he looks like. Much of the title card is a white shining photoshop effect, and that’s not good advertising. The stages look nice and work well, but the floor looks extremely low res and could use some touching up. The powerups and weapons are simple and effective (except the crossbow), but the targeting and hit detection is sketchy and the crossbow will never be as useful with its introductory 14 shots as opposed to the infinite-rapid-fire pistol you start out with, making the first weapon powerup you get nearly useless.

Overall, Vampires Until Dawn is a good average game with some issues to iron out. I look forward to seeing where this game will go and how it will improve because it has the potential to be great. For now it earns itself a well deserved 3. I’ll be looking forward to the next version update with the promised Open Feint compatibility.